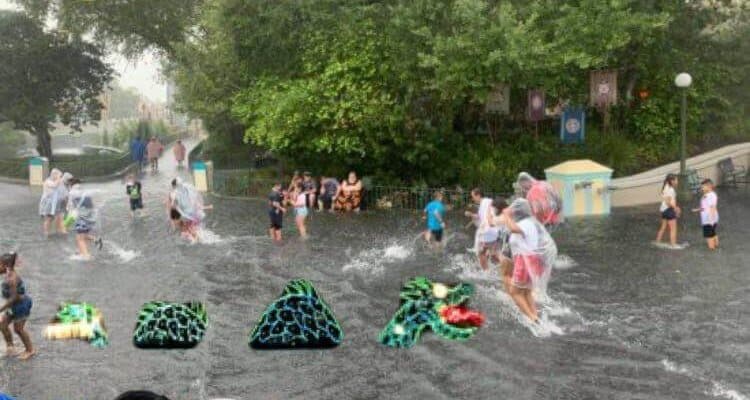 In case you haven’t yet heard, the Florida rain recently caused parts of Magic Kingdom to become so flooded that it was nearly a water park! Kids were seen legitimately splashing around throughout the walkways as if they were at Typhoon Lagoon.

One member of the Facebook Group Annual Passholders – Walt Disney World Resort, Cassie C., was visiting Magic Kingdom during the storm and sent Inside the Magic the following photos. Within the images, you can clearly see kids “swimming” in the walkways near the entrance to Tomorrowland!

These photos have made their rounds on the internet and some fans decided to have a bit of fun with them. One Reddit user, TravelArtist248 photoshopped a new cavalcade into the flood — mimicking the famous Electrical Water Pageant that tends to show around Seven Seas Lagoon.

Another Reddit user, Ekecede, photoshopped the Olympic swim team into the flood, writing:

Despite the torrential downpour, it is clear that families visiting Magic Kingdom did not let a little rain stop them from having fun, and Disney fans everywhere are having some fun of their own with these photos as they photoshop completely unrealistic elements into the images.

If you have an upcoming vacation, be prepared to not only bring sunscreen and sunglasses, but ponchos and extra clothes as the rainstorms in Orlando during the summer months can come on suddenly.

It is also important to keep in mind that having a stormy day at the parks could really change the trajectory of your day at times as select Disney World attractions may close due to the rain. With this being said, there are many attractions at the theme parks located indoors that Guests can enjoy while they wait out the storm.

Have you ever witnessed flooding at the Walt Disney World theme parks? Let us know in the comments below.