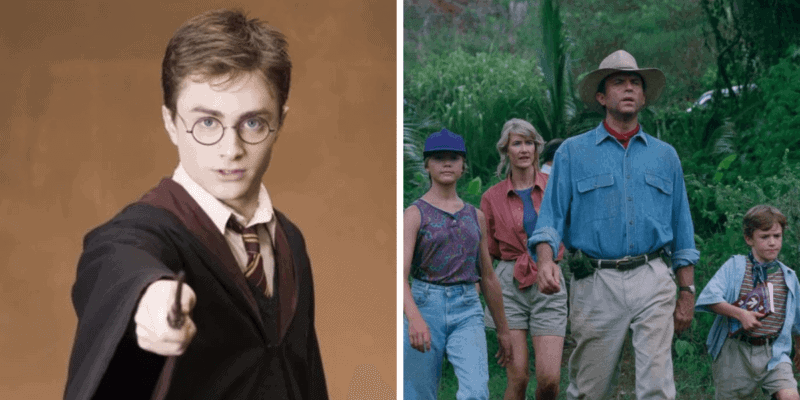 When it comes to fandoms, two franchises with the most dedicated fan bases are those who love the Harry Potter books and films and those who love all things, Jurassic Park. Since fans were introduced to both franchises decades ago, their love and loyalty to both have only increased.

One thing fans of both franchises also love is a good crossover.

Well, one artist has taken Harry Potter and Jurassic Park and created the ultimate crossover.

Twitter user @juandesignz has billed himself a graphic designer, Disney alumni, and a member of Hufflepuff House. According to his profile, he also loves to work with raptors. He has taken his love for both Harry Potter and Jurassic Park and created something truly inspired. Juan has given several main characters in the Jurassic Park films their very own wands!

Take a look at the amazing designs Juan tweeted below.

What if… Jurassic Park characters where wizards. 🦖✨

As you can see above, Dennis Nedry’s wand is designed after a Dilophosaurus, the dinosaur that killed Ned when it sprayed him with poisonous venom.

John Hammond’s wand is designed after the famous mosquito from which he was able to extract the dinosaur DNA, which was the first step in creating Jurassic Park. It is also a design that Hammond used for his famous walking stick, so the wand fits him to a tee.

Since Dr. Alan Grant was famous for carrying a raptor claw with him at all times, so it is only fitting that his wand has its very own raptor claw. Dr. Elli Sattler was a Paleobotanist, so it makes sense that her wand is designed after one of the most famous herbivores of all time, the triceratops.

Not to be forgotten, Juan has also included a wand for mathematician Ian Malcolm — famously played by Jeff Goldblum. One of Malcolm’s most famous scenes is when he distracted a giant Tyrannosaurus Rex and led it away from a tour vehicle that has kids inside. Since he was so brave — but also not that smart — his wand has the famous T-Rex silhouette.

Malcolm was most famous for saying “Life finds a way”, so in true homage to his wands, Ian Malcolm, and Jurassic Park, Juan let follows know:

Magic does indeed find a way, and maybe someone can find a spell to make these wands a reality!

Which one of Juan’s wand designs is your favorite? Let us know in the comments!