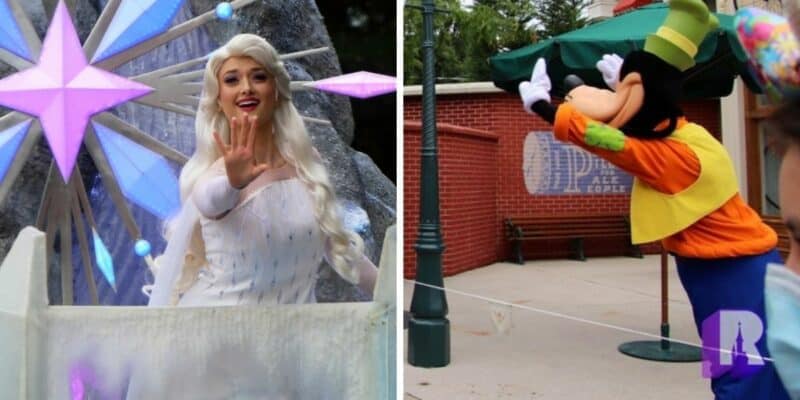 Seeing Disney characters at the theme park is one of the most magical aspect of Disney. From the Disney Princess to, of course, the one and only Mickey Mouse, regardless of your age, meeting the characters brings the inner child out in all of us.

But what is even more magical is when worlds collide — Seeing the Fab Five interact with the Disney Princesses, for example, does not happen often so when it does, many consider it a magical moment.

Well, recently one of the members of the Fab Five began cheering on the Frozen queens in Disneyland Paris.

Anna and Elsa have been making appearances on a Frozen-themed float in Disneyland Paris for Disney’s Ultimate Princess Celebration. Well, on one of their recent endeavors, they passed by Goofy, who was greeting Guests nearby. Goofy immediately stopped what he was doing to cheer on the Queens as they wrapped up their route.

DLP Report posted the following photo, showing Goofy cheering as the Frozen-themed float passed by along with the caption:

We think it’s so fun when worlds collide and Disney characters from different stories interact with one another, especially when they show full love and support! Watching Goofy cheer on Elsa and Anna from the sideline is truly a magical moment.

Have you ever seen Disney characters from different stories interact with one another? Let us know in the comments below.

If you want to visit the Disney Parks on your next vacation, start planning today! With the help of our friends at Academy Travel, you won’t miss out on anything when visiting the Disney Parks. Click here to get started.