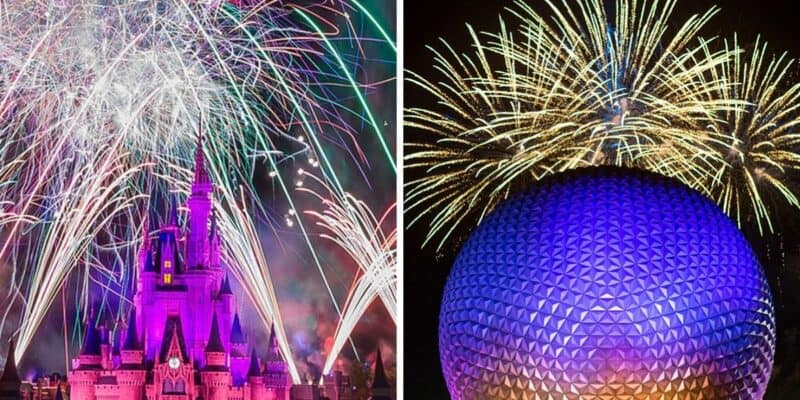 Guests are piling into the theme parks at Walt Disney World now that fireworks and nighttime spectaculars have officially returned. Typically, you will see Guests claim their spot early around the hub in front of Cinderella Castle to get the perfect view of Happily Ever After — or around World Showcase Lagoon for EPCOT Forever.

However, a handful of Disney World Guests were able to spot both fireworks shows — at the same exact time!

Reddit user WannabeWalt shared a video last night (August 13) to the social media platform, along with the caption:

MK and Epcot fireworks at the same time

MK and Epcot fireworks at the same time from WaltDisneyWorld

In the video, you can see Guests watching Happily Ever After from outside of the theme park at Disney’s Contemporary Resort. Before you know it, the video quickly pans to the other side of the Resort, where EPCOT’s fireworks — EPCOT Forever — could be seen also lighting up the night sky!

Not only did these Guests get to watch Magic Kingdom’s Happily Ever After, but also got to catch a glimpse of EPCOT Forever behind them, which if you ask me, is certainly a magical moment!

If you have not seen Happily Ever After, be sure to catch it prior to September 28 as it will become part of “Disney history” to make way for a  brand-new nighttime show called Disney Enchantment, which will debut on October 1 at Magic Kingdom in honor of Walt Disney World’s 50th anniversary.

The official description of Happily Ever After reads:

EPCOT Forever returned to EPCOT on July 1, prior to the debut of HarmonioUS — which will set off for the first time on October 1, 2021. Also debuting on Disney World’s 50th anniversary is Disney Enchantment at Magic Kingdom.

If you have never seen EPCOT Forever, the official description reads:

Witness the wonder as the story of Epcot and its next incredible chapter come to life in this new nighttime spectacular. Behold the single “spark of imagination” that started it all. Watch it grow, evolve and transform into an epic nighttime extravaganza that stirs the senses and captures all you love about Epcot—and all that’s to come—with dazzling fireworks, stunning laser effects set to tunes that have become theme park favorites.

Have you ever seen two Disney fireworks shows at the same time? Let us know in the comments below.

If you want to visit Disney World to see fireworks on your next vacation, start planning today!