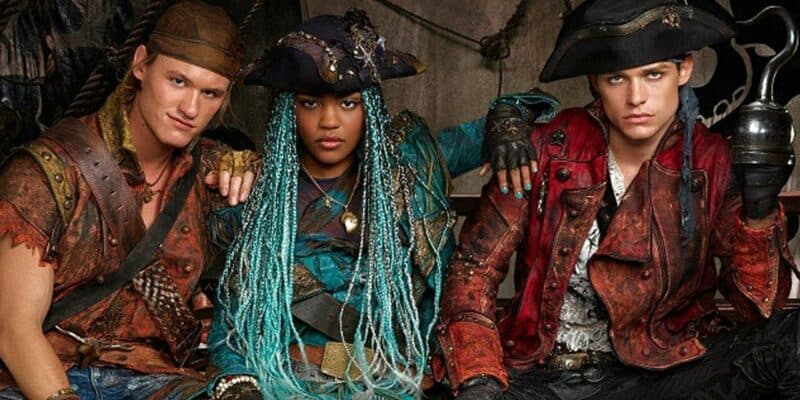 Scottish actor Thomas Doherty — best known for his time as Harry Hook in Disney’s The Descendants franchise and as Sean Matthews on Disney Channel’s musical series The Lodge — has recently found himself starring in HBO Max’s reboot of the popular Gossip Girl series.

The official summary of the revival series reads:

Eight years after the original website went dark, a new generation of New York private school teens are introduced to the social surveillance of Gossip Girl. The prestige series will address just how much social media—and the landscape of New York itself—has changed in the intervening years.

The 26-year-old’s character, Max Wolfe, is Ed Westwick’s “Chuck Bass”, of sorts, in the reboot — the under-parented, overprivileged heartthrob with too few morals and too much money.

In a recent Variety article, it was noted that the character does, however, have some differences from the original bad boy of the Upper East Side:

During the actor’s audition, Safran noticed that Doherty was making the character too sinister, closer to Chuck Bass (Ed Westwick) from the original series. “I worked with Thomas in the notes session,” Safran says as he recalls telling Doherty: “‘Actually, this guy has more Cary Grant about him, like a rakish winking — you’re in on it with him.’ Once I said that to him, Max was born.”

Related: Dove Cameron Gets Candid About Her Sexuality

Furthermore, where Bass only had eyes for Blair Waldorf (Leighton Meester), Wolfe has eyes for, well, just about everyone. Doherty told Variety:

“I have always seen sexuality as a spectrum,” he says. “But playing Max, a pansexual character, was incredibly liberating. It was very educational, and it definitely made me challenge my own preconceived notions, my indoctrination, of ‘This is who you love, this is what you do, everything else is wrong.’”

Related: How ‘Descendants 4’ Could Happen Without Cameron Boyce

Doherty also shared gratitude about his time as a Disney Channel star, but admitted he was ready for a new challenge as an adult actor, hence his transformation into — in Variety‘s words — the “pansexual heartthrob” he has become on the Gen-Z Gossip Girl revival:

“Disney is such a huge platform and there’s a lot of exposure, so it definitely gave me that,” Doherty says. “It was my first time on a movie set, which was really exciting.” The part earned him a devoted fan base — he now counts 4.4 million followers on Instagram. “Americans love Disney,” Doherty muses. “They go mad for Disney, so that was interesting: getting stopped on the street and asked for pictures and stuff.”

But he was ready to graduate to more serious material. Doherty’s first adult role arrived in 2020, in Hulu’s “High Fidelity” TV series. Although he appears in only three episodes, he made an impression as a musician who sleeps with Zoë Kravitz’s record-store owner Robyn Brooks.

With Doherty’s star clearly on the rise, and both Disney Channel and Hulu projects under his belt so far, it will be interesting to see if the actor makes the leap to any additional Disney-owned franchises in the future.

Fans can currently watch Doherty in Descendants 2 streaming on Disney+ anytime. The official description of the Disney movie reads:

When the pressure to be royal becomes too much for Mal [Dove Cameron], she returns to her rotten roots on the Isle of the Lost. There, she finds that her archenemy Uma [China Anne McClain], daughter of Ursula, has taken her spot as self-proclaimed queen of the run-down town. Uma, still resentful over not being selected to go to Auradon with the other Villain Kids, directs her pirate gang, including Captain Hook’s son Harry [Thomas Doherty] and Gaston’s son Gil [Dylan Playfair], to break the barrier between the Isle of the Lost and Auradon…unleashing all the villains imprisoned on the Isle, once and for all.

What do you think about Doherty’s move from Disney Channel star to “pansexual heartthrob” on HBO?

Comments Off on Disney Star Transforms Into “Pansexual Heartthrob”