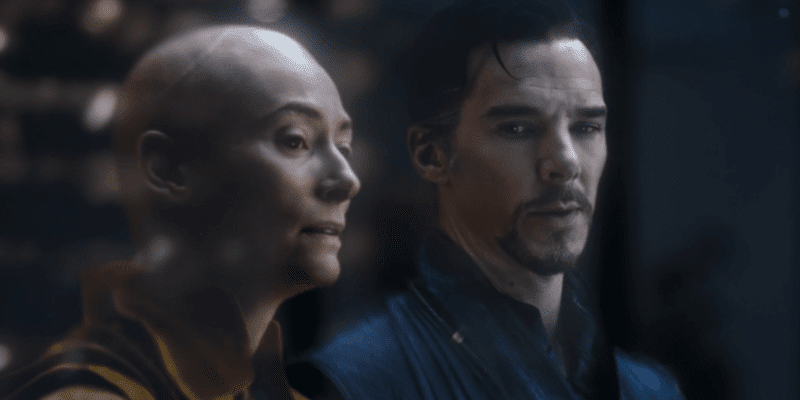 Another well-known actress, Tilda Swinton, rounded out the cast as Doctor Strange’s mentor, the Ancient One. But, despite Swinton’s acting capabilities, her appearance as this comic book character drew much criticism and still does to this day. Now, Swinton weighs in.

Doctor Strange was directed by Scott Derrickson and became the 14th film of Kevin Feige’s Marvel Cinematic Universe. Telling a rather singular story as opposed to its predecessor, Captain America: Civil War (2016) — which was essentially another Avengers movie from the Russo Brothers –, Doctor Strange introduced the world to Cumberbatch’s arrogant surgeon, Stephen Strange, and his quest for healing following a near-fatal car crash.

It was the first time Marvel fans saw the mystic arts in all their visual glory — the movie is still lauded for its visual effects and mesmerizing score. Guided by Master Wong (Benedict Wong), Strange learns about sanctums, magical texts, and the mind-bending reality of the Astral Dimension. Watching over Strange’s teachings though was the powerful Ancient One.

In Marvel Comics the Ancient One is the Sorcerer Supreme who guides Stephen Strange in the ways of the mystic arts in order for him to become his successor. The character — who was created by Marvel legends Stan Lee and Steve Ditko — was born in the fictional land of Kamar-Taj, a place locked away in the South and East Asian mountain range, the Himalayas. However, despite the character’s Asian heritage, Marvel Studios opted to cast Swinton in a Celtic incarnation of the Sorcerer Supreme.

When the casting news first broke it was met with backlash but Marvel aimed to explain their casting decision. Via Variety, the superhero studio stated:

“…the Ancient One is a title that is not exclusively held by any one character, but rather a moniker passed down through time, and in this particular film the embodiment is Celtic. We are very proud to have the enormously talented Tilda Swinton portray this unique and complex character along- side our richly diverse cast.”

Despite the diversity of the rest of the movie’s cast, Marvel’s choice to have Swinton take on the role of a typically Asian character has drawn much controversy. The actress has finally weighed in on the topic during a recent interview.

Speaking to Variety, Swinton reflected on the backlash her casting as the Ancient One in the superhero movie has caused.

“I remember at the time having a question mark in my own mind, and being attendant to the public response to the idea that a Scottish woman will be playing this character, and being aware that there was no resistance at all — there was widespread welcome — which shifted at a certain point, for very good reasons with which I had an enormous amount of sympathy.”

“The audience feels ever more empowered to contribute to the narrative and to feel heard within the narrative, and that’s a really healthy social development.”

In 2016, Swinton became further caught up in the diversity casting debate when she started correspondence with the Korean comedian, Margaret Cho, who clapped back at Swinton — who she had never met — about why the actress needed her specific commentary on Asian whitewashing.

“I made a questionable decision to reach out to somebody in a certain way, which was naive and clearly confusing, because their misunderstanding came about because of it.

“I was embarrassed that I had maybe gone up a blind alley in starting the correspondence in the first place — maybe I had confused matters — but beyond that, I have zero regrets.”

Recently, the Marvel boss himself, Kevin Feige, brought up the conversation in a recent interview with Men’s Health.

While she was killed in the first installment of the Doctor Strange movies, Swinton did reprise her role as the Ancient One in the Infinity Saga conclusion, Avengers: Endgame (2019). It is not known if Swinton will return to the role in the upcoming Marvel movie, Doctor Strange in the Multiverse of Madness (2022) — we know that death doesn’t mean dead in the Marvel universe –, but the mystical Doctor Strange sequel will see the return of many of the original cast.

Elizabeth Olsen’s Avenger Wanda Maximoff AKA Scarlet Witch — fresh from her win over Agatha Harkness (Kathryn Hahn) — will also appear, as well as Xochitl Gomez, who makes her MCU debut as America Chavez.

In fact, Disney+ just altered the post-credits scene of the WandaVision finale, and some Marvel fans think Doctor Strange has been added to the episode. The character was actually scheduled to appear in a WandaVision episode, according to Feige, but the Marvel Studios President didn’t want the “white guy” to tell Wanda’s story for her.

Directed by Sam Raimi and written by Jade Bartlett and Loki‘s Michael Waldron, Doctor Strange in the Multiverse of Madness is scheduled to release on March 25, 2022.

What do you think of Tilda Swinton’s casting as the Ancient One? Let us know in the comments!