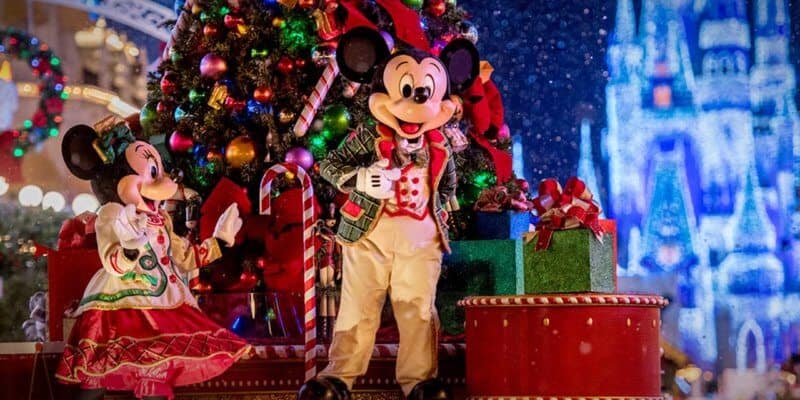 One of the most magical things about walking down Main Street, U.S.A., during the holidays is seeing the lights all around you, a massive Christmas tree in your rearview, and having “snow” fall as you walk around.

Since Disney World is located in Florida, the idea of having snow in the theme park is a little far-fetched, as the Central Florida climate in Orlando does not typically produce flurries. It can get chilly depending on the time of year, which can help immerse Guests in the Christmas spirit, but snow is hard to come by in the sunshine state.

To give Guests a winter wonderland, Disney World can make it “snow” on command wherever they would like! As many Disney Fans like to call it, “snoap” (snow + soap) is a magical aspect that can add a lot of holiday cheer to any theme park day. As we are now halfway to the holidays, Disney has now released all of their holiday offerings, and lucky for us, snow on Main Street, U.S.A. is on the list!

If we look at the Disney World website for Disney Very Merriest After Hours section, we can see that one of the event offerings reads, “Snowfall on Main Street, U.S.A.”. This is interesting because if the “snoap” is an event offering, this could mean that Guests will not be able to experience any “snoap” during a regular theme park day and will have to instead buy a ticket to the After Hours event to get that atmosphere of a winter wonderland. Snow is not listed as an offering as daily offerings at Magic Kingdom during the holidays.

Disney World will be celebrating the holidays in all of their other parks as well! Disney’s Animal Kingdom will light the Tree of Life with holiday cheer, Sunset Boulevard at Disney’s Hollywood Studios will be decked out, and EPCOT will host Festival of the Holidays!

Do you plan on spending Christmas at Disney World this year? Let us know in the comments below!

Comments Off on Snoap Returns to Disney World on Select Nights