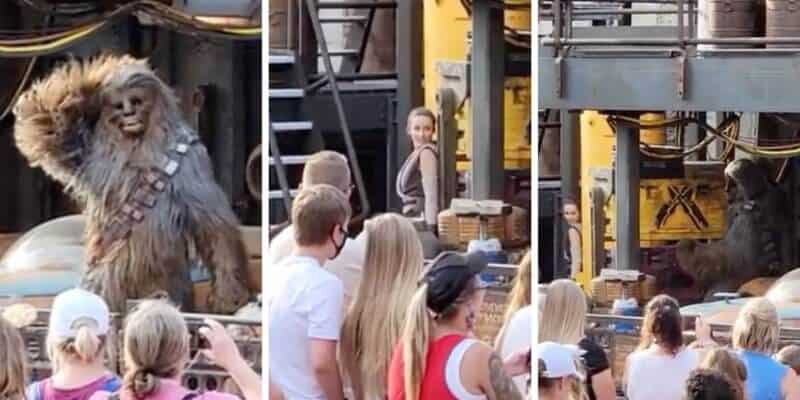 If there is one thing that makes Walt Disney World stand out from other theme parks, it’s the character experiences. From meet and greets (though temporarily suspended due to the ongoing pandemic) to characters popping up throughout the theme park to cavalcades, there are so many different experiences that Guests can have with Disney characters.

On a recent Disney World trip, many Guests were in for a treat when they spotted Chewbacca and Rey having a little friendly competition with a game of hide-and-seek in Galaxy’s Edge at Disney’s Hollywood Studios.

Reddit user xcheck76 posted a video of Rey and Chewbacca inside Galaxy’s Edge playing a game of hide-and-seek. Rey was clearly the one hiding, while Chewie searched up and down trying to find his friend.

Rey and Chewbacca playing hide and seek from WaltDisneyWorld

We love seeing Disney characters go above and beyond to make magical moments for Guests. Seeing Rey and Chewbacca is a norm for Guests, however, they are usually just standing on the platform waving and posing for socially distanced selfies. So seeing the duo get a little creative and have some friendly competition was certainly a treat for many visiting Batuu that day.

Have you ever seen Rey and Chewbacca play hide-and-seek? Let us know in the comments below.

Do you want to visit Walt Disney World on your next vacation? If so, make sure you start planning today! Click here to get started.

Comments Off on Watch: Rey and Chewbacca Play Hide-and-Seek In Galaxy’s Edge