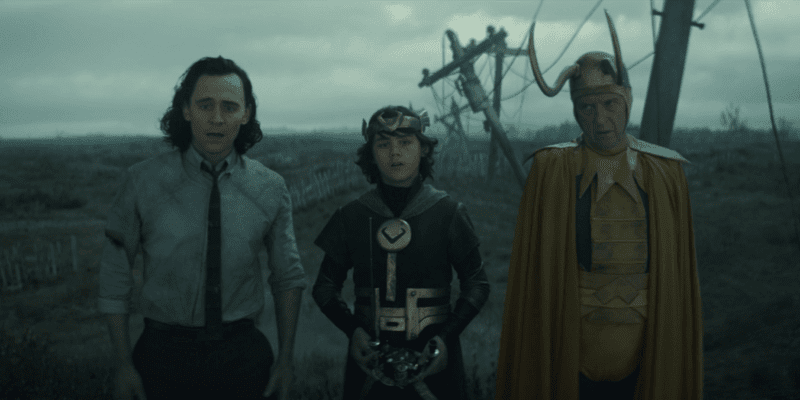 As shocking as it may seem, there is just one episode left in Marvel’s hit new series Loki. Episode five of Loki is now available for streaming on Disney+ and boy, is it a doozy. We finally meet and get to know more Loki variants — including alligator Loki — and we see where variants go when they are pruned.

One of the crazier events to happen in this episode is the introduction of Alioth — a creature free from the flow of time who roams around the Void where Loki has been sent and destroys anything in its path. One of those things in its path is a large destroyer ship called the USS Eldridge. What makes this so intriguing is that this is the second time Loki has pulled from the real world and incorporated it into Loki’s.

In episode one of Loki, we learned that he was D.B. Cooper — an infamous airline hijacker who has never been identified. In episode five, the USS Eldridge lands in the Void, and Alioth immediately has the ship set in its sights. The crew of the doomed ship tries to fight back, but they are quickly destroyed.

In reality, the USS Eldridge was built in a Philadelphia Naval shipyard to help fight the Nazis in World War II. The ESS Eldridge was sold to Greece after WWII in 1951 where its name changed to the HS LEON (D-54), it was decommissioned in 1992.

According to the tale, the ship was being outfitted with cloaking technology that would allow it to avoid detection from German U-boats. When the ship was completely outfitted, they took it out onto the water to run a test of the new technology.

What happened when the ship turned on the generators to avoid radar detection has become part of historical lore. According to witnesses, a blue-green glow surrounded the ship and the ship then disappeared into thin air. The ship was then spotted in a shipyard and Virginia, but then disappeared once again, only to reappear in Philadelphia!

The crew that had disappeared with the ship had also seemed to go through a traumatic experience when the ship vanished. When it returned, many crew members were disoriented and suffering from severe burns. There were even some members who seemed to be inexplicably partially embedded into the ship.

Again, this is just a tale that has been debunked time and time again, however it is fun to continue to see Loki use elements from the real world in its storytelling. Almost as if to say that Philidelphia Experiment would have happened if the TVA did not get involved to erase it from the Sacred Timeline.

Bringing these real-life urban legends into Loki is truly one thing that sets it apart from other Marvel shows. Both WandaVision and The Falcon and the Winter Soldier pretty much stick to the Marvel Universe — but they are still incredible shows that are Marvel fans should watch. Loki bringing in both D.B. Cooper and the USS Eldridge bring an extra layer of reality to a show and universe built around fantasy.

Loki head writer Michael Waldron has said that the show will have a huge impact on the Marvel Cinematic Universe, so it will be interesting to see how the show wraps up. The season finale of Loki will premiere on Wednesday, July 14 on Disney+.

What is your favorite aspect of Loki? Let us know in the comments!

Comments Off on ‘Loki’ Just Addressed Another Urban Legend