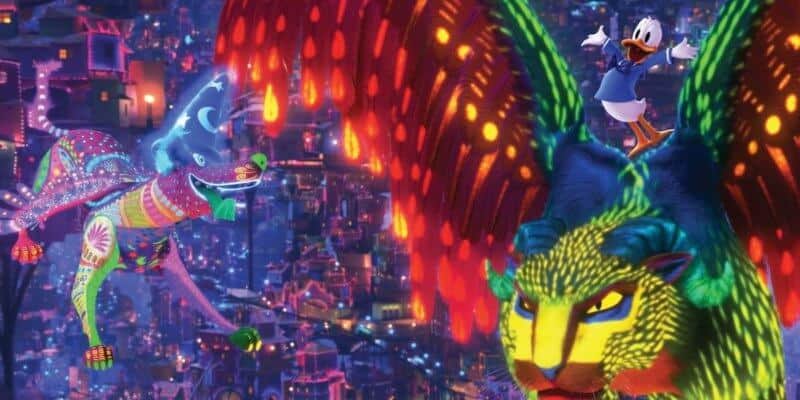 Guests will soon be taken into a Pixar film for the first time ever as Mickey’s PhilharMagic at both Walt Disney World and Disneyland Resort will soon include a new scene — Featuring Disney and Pixar’s Coco!

In case you aren’t aware, Mickey’s PhilharMagic is a classic attraction at both Walt Disney World Resort in Orlando, Florida and in Disneyland Resort in Anaheim, California. The 3D adventure stars some of our favorite classic Disney characters including Mickey Mouse and Donald Duck as they get ready to put on an incredible orchestra. However, Donald decides to put on Mickey’s sorcerer hat and things get a little out of hand.

Donald ends up going through some of the most beloved Disney animated films as he finds himself in the middle of some Disney classic song scenes including “Be Our Guest” from Beauty and the Beast, “A Whole New World” from Aladdin, “I Just Can’t Wait To Be King” from The Lion King, and more.

Now, for the first time ever, Guests will be taken into a Pixar film as Mickey’s PhilharMagic is adding a new “Un Poco Loco” scene. And ever since this news was first announced, fans have been sharing nothing but their excitement.

ITM Facebook follower, Peter J. said he is glad it is an addition and not a replacement:

Glad it will be “in addition to” and not “instead of” the current lineup.

Something that Clint G. agreed with:

Cool. Love that it’s an addition to an already great show.

This is actually pretty cool! Nice to see something new added

Ole! Hope we get some Three Caballeros dialogue from Donald!

I’m pretty happy about this

While Jennfer L. had an idea for another new addition — Tangled!

They should add a trip to the snuggly duckling too

Kevo R. did not hold back sharing his excitement:

YESSSSSSSSSSSS, shows like this SHOULD get regular updates! How exciting!!

On the other hand, some are not happy about this addition. Jenna W. simply said:

no, I love it the way it is. just upgrade the animation, make it look nicer.

Summer W. also said they were not happy about the addition:

No no no no and no

The new Coco scene will debut at Disneyland’s version on July 17 and at Walt Disney World’s version later this year in time for the 50th celebration, which will kick off on October 1.

If you want to visit Disneyland or Disney World to see the new Coco scene on your next vacation, start planning today!