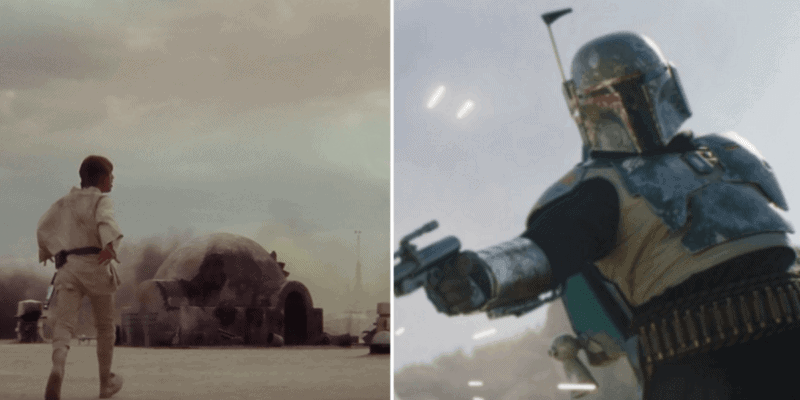 As the Star Wars project portfolio continues to grow so do the many opportunities Lucasfilm has to connect the expanding universe. Regardless of fans’ opinions on the latest entries into the Star Wars saga, Lucasfilm and Disney must be given credit for their commitment to continuing the fan-favorite franchise that George Lucas made famous.

Star Wars is likely to dominate both the big and the small screen for quite a few years to come with lots of announced projects already on the agenda and likely more up Lucasfilm President Kathleen Kennedy’s sleeve — the chances of seeing more of our favorite characters are pretty locked in, and this theory might just place a key figure at the center of one of Star Wars‘ most brutal killings.

At the end of last year, Lucasfilm announced numerous new projects including Andor, Ahsoka Tano’s series — Ahsoka, and Obi-Wan Kenobi, among others. What fans were also treated to during an intense post-credits scene of The Mandalorian Season 2 finale was that iconic bounty hunter, Boba Fett, would be getting his own spinoff, The Book of Boba Fett. The title was revealed shortly after Boba claimed Jabba’s throne.

Teaming up with Ming-Na Wen’s Fennec Shand, Temuera Morrison is bringing Boba Fett back to the small screen in a new series following his starring turn in The Mandalorian Season 2. While not much is known regarding the plot of The Book of Boba Fett, we do know a couple of things — the season has wrapped filming according to Shand actress, Wen; it will bring back Jon Favreau and Dave Filoni (and more!) as directors in showrunner Robert Rodriguez’s show, and it will “go back in time” to where the character of Boba Fett has been since the original trilogy.

Morrison’s hint that we will get to see a younger version of Boba Fett is interesting — The Book of Boba Fett will take place after the events of Star Wars: Episode VI – Return of the Jedi (1983) along with The Mandalorian and Ahsoka.

Not only because Star Wars is currently exploring this specific timeline — namely around Star Wars: Episode V – The Empire Strikes Back (1980) — in their massive Marvel Comics War of the Bounty Hunters crossover event, but also because it means the Disney+ series will be delving deeper into the much-wanted, much-theorized history of the beloved character.

In fact, a recent theory has suggested that taking a look back at Boba Fett’s history in the Star Wars series might include attaching him to one of the Skywalker Saga’s most tragic deaths. In Star Wars: Episode IV – A New Hope (1977), Luke Skywalker’s (Mark Hamill) Uncle Owen (Phil Brown), and Aunt Beru (Shelagh Fraser) are killed off-screen following the family getting tied up, unbeknownst to them, with the Galactic Empire. While the death of the family Luke has only ever known was put down to the stormtroopers, a new theory has linked Boba Fett to the killings of Owen and Beru.

For context, the theory states that the killing of Owen and Beru is seemingly too chaotic and out of character for stormtroopers, commenting that — as we also explicitly learn from The Bad Batch — soldiers follow orders and that it also seems uncharacteristic of Darth Vader to order something so unpolished. And so to Boba Fett…

The first piece of evidence that Boba was involved is that he was in the right place at the right time. The 1997 special edition of A New Hope added a scene into the early events of the film where Jabba the Hutt and his cronies confront Han Solo in Moss Eisley. Among Jabba’s henchmen was none other than Boba Fett, meaning, since he was on Tatooine at the time of the Lars’ murder, there’s no way to prove he wasn’t working overtime with the Empire.

They go on to add that Boba Fett being on Tattoine at the same time as Vader is looking for C-3PO and R2-D2 could suggest that the bounty hunter might have taken the job to earn himself a few extra credits.

On top of that opportunity, overkill is also Boba’s style. When Vader was briefing all of the bounty hunters in The Empire Strikes Back, he made a point of stopping to tell Boba, “No disintegrations.”

While this may not have been a hark back to any previous murders, this line could also be the hinge on which Star Wars retcons this part of its own history, paving the way for Boba Fett to become even more entangled in the Star Wars universe.

This does actually make sense, or at least it isn’t so much of a stretch when you consider the wider catalog of projects coming out from Lucasfilm in the near future as well as where Star Wars has taken us so far. We know from Dave Filoni’s animated series The Bad Batch that young clone Omega (Michelle Ang) is closely tied to Boba Fett and that Cad Bane’s appearance in The Bad Batch also signals that iconic unproduced duel is finally being made.

Then there’s Deborah Chow’s Obi-Wan Kenobi, which sees Ewan McGregor reprise his role as Jedi Knight Obi-Wan Kenobi set 10 years after Star Wars: Episode III – Revenge of the Sith (2005). Joining McGregor are young Owen and Beru actors, Joel Edgerton and Bonnie Piesse, respectively. Their reprisal in Obi-Wan Kenobi might suggest that the two characters will have more of a leading role in the Disney+ series, meaning there is more than enough room to somehow foreshadow a Boba Fett encounter further down the line.

Whatever happens, Star Wars could be set to reintroduce Boba Fett across multiple projects and the future has never looked so bloodthirsty in the galaxy far, far, away…

Do you think Boba Fett could have killed Uncle Owen and Aunt Beru? Let us know in the comments!