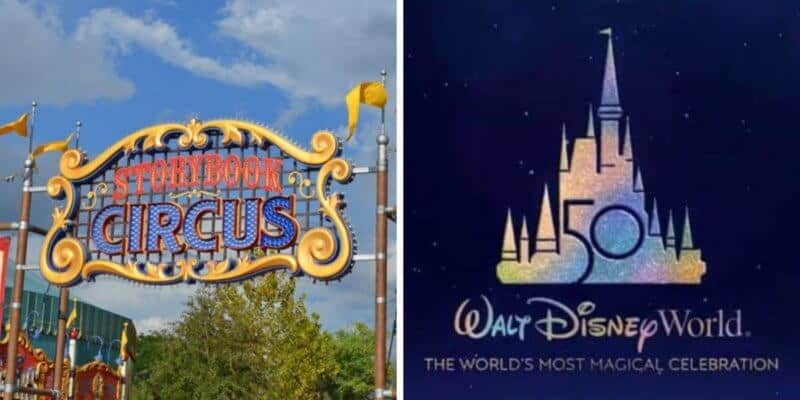 Related: Will Fantasmic! Open In Time For Disney World’s 50th?

Disney Imagineers already began working on attractions including Prince Charming Regal Carrousel, the marquees of Peter Pan’s Flight and Dumbo the Flying Elephant, and Casey Jr. Splash ‘N’ Soak, so they are in tip-top shape for the 50th. Additionally, the Tangled area of Magic Kingdom and recently received some tender loving care, which you can read more about here.

Now, according to a recent permit filed, it looks as though yet another area of the theme park will be getting the 50th treatment.

Related: Disney Gearing Up For Work on Pete’s Silly Side Show Tent

According to recent records, a permit has been filed by Disney for the location of Storybook Circus. The permit states that the work needed to be done is to remove and refurbish the marquee. The marquee, which you can see in the image above, simply says Storybook Circus in red and blue lettering and a golden frame.

But as we near the 50th-anniversary celebration, Disney could be repainting the Storybook Circus marquee so that it stays in line with the EARidescence theming coming specifically for Disney World’s 50th!

At this time, Disney has not stated what exactly this permit is for, aside from the statement of work which, again, is to remove and refurbish the marquee at Storybook Circus. Inside the Magic will update you as we get information regarding anything with the 50th anniversary.

Will you be visiting Disney World for the 50th anniversary? Let us know in the comments below.