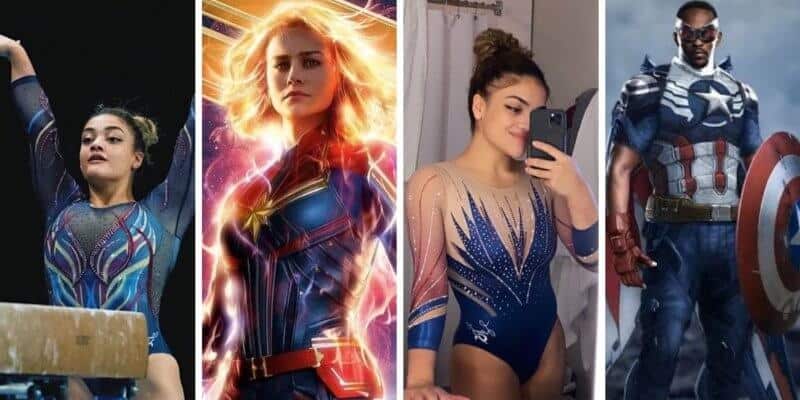 If you are a fan of sports, specifically gymnastics, you have probably been keeping up with Olympic gymnast Laurie Hernandez. Recently, Hernandez made headlines for her 2021 Winter Cup routine, which she did in Captain Marvel-inspired attire.

Brie Larson (Carol Danvers) spoke out about the incredible gear, complimenting how amazing it was and giving her a “formal stamp of approval”. At the time, Hernandez teased that more Marvel-inspired leotards would be coming this year.

Now, the Olympic gymnast is not only thanking Marvel for inspiring her, but also showing off her famous Captain Marvel-inspired leotard and three other designs!

this is kinda lit @Marvel thanks for the inspo

this is kinda lit @Marvel thanks for the inspo? pic.twitter.com/MvD1s7KEhK

The first leotard (left) is the iconic Captain Marvel-inspired gear that made headlines in February for her 2021 Winter Cup routine. The other three leotards are inspired by Marvel super heroes Black Panther, Scarlet Witch (aka Wanda Maximoff), and Sam Wilson’s Captain America as seen in the Disney+ series, The Falcon and the Winter Soldier.

Hernandez also shared some of these Marvel-inspired leotards to her Instagram. The first photo she shared was one where she was sporting the Scarlet Witch-inspired gear:

yesterday i was doing a dismount during comp warm ups (3rd slide) and hyperextended my knee. we taped it up and still competed beam, but unfortunately we had to pull out for the rest of day 1. (we’re still keeping an open mind about day 2 and playing it by ear.) definitely sucks… not the way i thought this would go- but thank you for all the love and support. ♥️

(btw, the superhero this leo was inspired by is scarlet witch 🙂

And more recently, Hernandez shared her leotard inspired by Sam Wilson’s Captain America, where she wrote:

here’s a day 2 leotard reveal
♥️??. (inspo is captain america/falcon for those wondering 🙂 it’s my favorite one i think I’ve ever created. definitely heartbroken that this week didn’t quite go the way I’d planned, considering i won’t be competing tonight because of a knee injury from friday. I’m wishing all the girls the best of luck. y’all are gonna crush it?

The 20-year-old made a name for herself during her debut year as a senior gymnast. She competed as a member of the U.S. women’s gymnastics team, which was named the “Final Five”, at the 2016 Summer Olympics. The U.S. went on to win gold in the team event.

Unfortunately, Laurie Hernandez had just made the decision to withdraw from the U.S. Gymnastics Championships after hyperextending her left knee in balance beam warm-ups on Friday.

Which one of Laurie Hernandez’s Marvel-inspired leotards is your favorite? Let us know in the comments below.