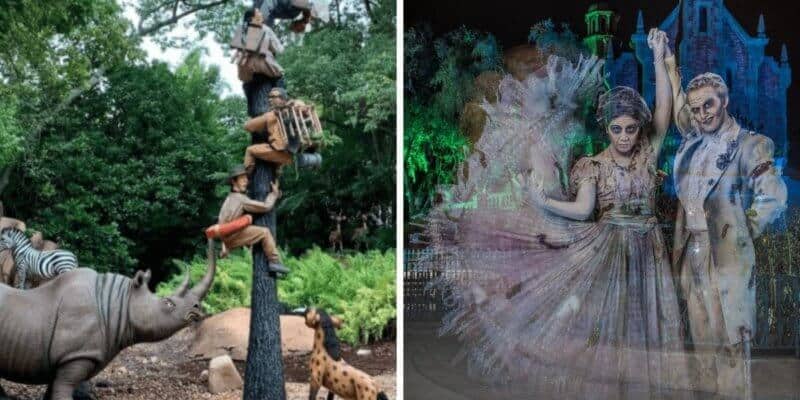 Jungle Cruise is one of Disney World’s most iconic rides — in fact, it was an opening day attraction at Magic Kingdom! But did you know that the Jungle Cruise is actually home to some recycled props from another Disney Parks attraction — Haunted Mansion?

According to reports online, the fan-favorite attraction, Jungle Cruise, features some of the leftover spider props from Haunted Mansion:

The Spiders appeared in the Liberty Square Mansion in the area of the attraction which now holds the Endless Staircase.

They are the exact same model of spider used in the Disney ride, “The Jungle Cruise” where they appear in the ruins of a Cambodian temple along the Mekong river.

Another fun fact is that these spiders are actually designed to include a Hidden Mickey! Per Haunted Mansion Fandom:

The Spiders are very large (for spiders) and are orange-brown with striped legs and three spots on their backs. The design on their backs serves as a Hidden Mickey.

So the next time you are boarding the Jungle Cruise along with your Skipper, don’t just watch out for wild animals such as hippos and lions — but keep your eyes peeled for those iconic spiders, as they may look familiar.

Related: Jungle Cruise Reimagining at Disney World to Be Complete This Summer

In case you missed it, Jungle Cruise is currently undergoing a reimagining and Guests will soon enjoy a brand-new experience called Rivers Journey. This revamp is currently taking place at both Disneyland Park at Disneyland Resort and Magic Kingdom at Walt Disney World Resort.

The new version of the attraction is part of Disney’s efforts to tell diverse, inclusive stories across the theme parks. So, be on the lookout for several new scenes along the river (all interconnected) that will heighten the skippers’ legendary comedic tone as well as a new backstory involving Dr. Albert Falls and his granddaughter, Alberta Falls.

It is important to keep in mind that the name, Rivers Journey, will be the new journey that Guests will go on when they board Jungle Cruise.

Did you know that Jungle Cruise is home to some recycled props from Haunted Mansion? Let us know in the comments below.