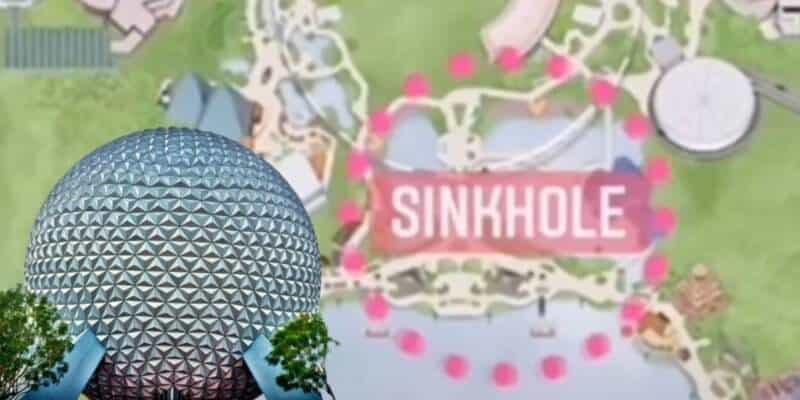 If there is one thing Florida has plenty of, it is swampy land. The entire state is heavily a wetland habitat, as any Disney Guest can attest to the humidity in the air.

Because of the temperate climate, it can be tough to build in some areas of Florida. One of the biggest problems someone can encounter when building anything in Florida is the many sinkholes that fill the state. Foundation Professional’s noted:

Sinkholes can form anywhere in Florida, but the highest activity level occurs in west central Florida because of the karst limestone environment. There are several influences that increase the risk of sinkhole activity such as long-term weather conditions, heavy acidic rains, and drought-like conditions.

If we take a look at Walt Disney World property, it seems impossible that an area the size of San Fransisco does not have any sinkholes — which is actually true! Disney World has a massive sinkhole on the property, and it is actually in the center of EPCOT.

As we can see from monorailsupplyco’s TikTok, EPCOT holds the deepest sinkhole in Florida!

If this Disney fact doesn’t go viral, I give up

The TikTok explains that the sinkhole caused major issues for Disney when EPCOT was being built, as it would suck in cars and trucks. To fix the problem, Disney decided to turn the sinkhole into a lagoon. The sinkhole can be found in the water under the bridge, connecting Future World to the World Showcase.

During a Q&A for the 30th anniversary, Imagineer Marty Sklar discussed the sinkhole:

“One of the reasons there’s so much space between Future World and the World Showcase lagoon is that we discovered a gigantic sink hole near where the Odyssey Restaurant is,” Marty said. “We couldn’t build anything on top of it.”

So, if there is one body of water at Disney World you definitely do not want to lose anything in, this would definitely be the one!

What do you think of this story? Did you ever wonder why the second body of water was aside from the World Showcase lagoon at EPCOT?