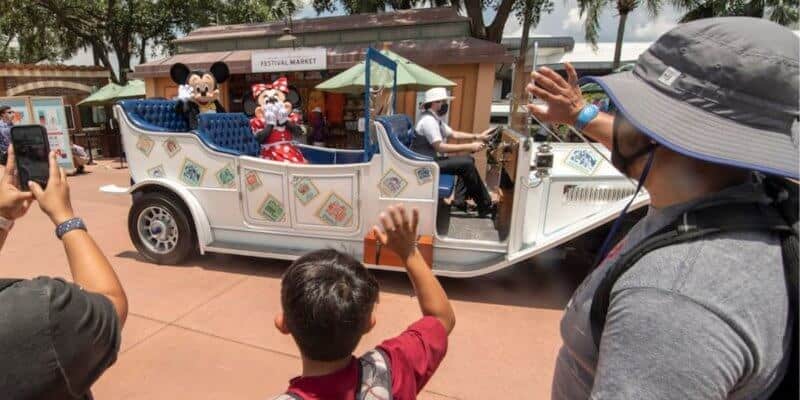 One of the things Guests look forward to most, especially the little ones, is meeting some of their favorite Disney characters. There’s nothing quite like running up and giving Mickey Mouse a hug or learning how to make snow with Elsa.

And, even though right now Guests may not be able to hug any of the characters due to the ongoing pandemic, it doesn’t mean that you can’t create magical memories with the current character greeting offerings!

Disney Parks Blog recently pointed out that even though meeting a Disney character is a bit different right now due to the ongoing pandemic, seeing your favorite pals around the theme park is still just as magical:

Seeing a favorite Disney character is a highlight for pretty much every guest visiting a Walt Disney World Resort theme park, and for preschoolers it’s a rite of passage.

The way you encounter a Disney character may be a little different right now. But you’ll still find a generous amount of blown kisses, waves and peek-a-boos – just from a distance. And there are still conversations that help create those treasured moments.

When roaming around Walt Disney World, keep your eyes peeled because you can spot Disney characters around any corner! Mickey, Minnie, Donald, and Daisy can be seen sailing down Discovery River at Disney’s Animal Kingdom and Cinderella, Belle, Snow White, and other Disney Princesses wave to Disney Guests from the top of the Main Street Train Station at Magic Kingdom.

Over in EPCOT, fans of Frozen can spot Elsa and Anna in the Norway pavilion of World Showcase! And, don’t forget to swing by Disney’s Hollywood Studios as some of our favorite Pixar Pals including Woody and Buzz Lightyear can be seen driving down Hollywood Boulevard.

Whether it’s Donald Duck and Daisy Duck sailing down Discovery River at Disney’s Animal Kingdom Theme Park, a regal “Royal Princess Processional” at Magic Kingdom Park, Pixar pals parading in vintage cars at Disney’s Hollywood Studios, or chatting with Anna and Elsa outside their Royal Sommerhus at EPCOT, there are playful encounters waiting for everyone throughout all four Walt Disney World theme parks. There are chances to get to see characters at attractions, and even opportunities to “Ka-chow!” with favorite cars from Radiator Springs at Lightning McQueen’s Racing Academy.

To see more ways to interact with characters, check out these preschoolers palling around with Mickey Mouse and Minnie Mouse and other friends during their best day ever at Walt Disney World Resort.

Have you been to Disney World recently? What do you think of the current character greetings offered at the theme parks? Let us know in the comments below.

Do you want to visit Disney World in the near future? Start planning today!