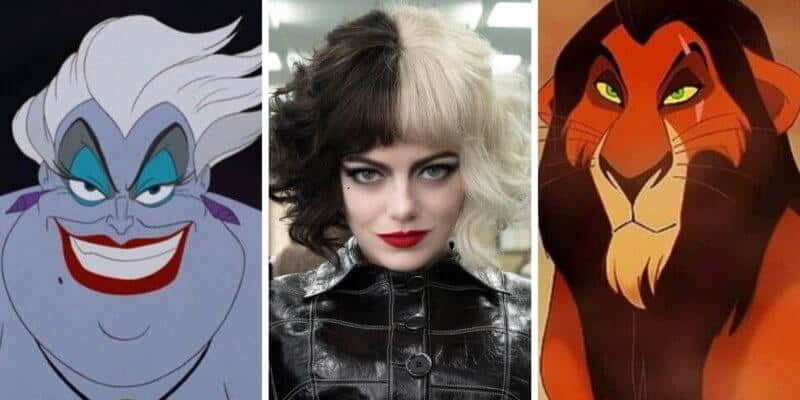 Fans everywhere cannot stop talking about how both Emma Stone and Emma Thompson stole the show. Stone took on the role of the iconic Cruella De Vil while Thompson portrayed Baroness.

The film is a prequel to the Disney animated film, 101 Dalmatians, and tells the backstory of the infamous Cruella De Vil. We learn where Cruella came from, why Cruella is the way she is, and what the iconic villain went through before we meet up with her in the 1961 Disney animated film.

The official description of Cruella (2021) reads:

After seeing Disney tell the story of Cruella De Vil, fans are eager to see which other Disney villains could have a standalone live-action film.

Should Disney create a movie focused solely on Jafar from Aladdin? Or maybe we find out just how the Shadow Man came to be in a standalone backstory film focusing on Dr. Facilier from The Princess and the Frog? Perhaps we find out how Scar got his scar or what exactly happened between the two brothers in a film focusing on his story?

With so many possibilities, we wanted to hear from our Inside the Magic audience to find out who you wanted to see have the next live-action standalone film.

With an overwhelming response, Ursula from The Little Mermaid came in with 49% of the vote! Coming in second place is Scar from The Lion King with 13% of the vote, closely followed by Dr. Facilier from The Princess and the Frog with 11%.

10% of our audience said they’d love to see The Evil Queen’s backstory and 5% mentioned Jafar from Aladdin.

Some of the other villains that our Inside the Magic audience want to see featured in a live-action film include Hades from Hercules, Yzma from The Emperor’s New Groove, Mother Gothel from Tangled, Captain Hook from Peter Pan, and Lady Tremaine from Cinderella.

So it is clear that our Inside the Magic agrees with Emma Stone in saying that Disney now needs to make a live-action film focusing on Ursula’s backstory. Everyone wants to know what exactly went down between the Sea Witch and King Triton prior to Disney’s animated film, The Little Mermaid.

We do want to note that Disney is currently developing a live-action The Little Mermaid starring Halle Bailey, Javier Bardem, and Daveed Diggs. Ursula will be included in the film as Melissa McCarthy has been cast for the role, though, the film won’t tell the backstory of Ursula per se. It will, however, reportedly explore Ariel and Ursula’s family tree.

Cruella is currently playing in theaters as well as streaming on Disney+ as part of Premier Access.

Who do you want to see have their very own live-action film? Let us know in the comments below.

Comments Off on Whose Villain Backstory Should Disney Tell Next? Fans Weigh In