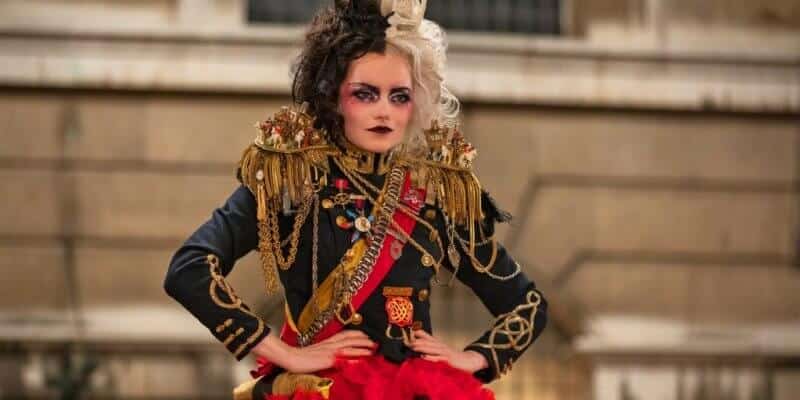 It’s safe to say that the costumes in the new live-action film Cruella were just outstanding. Considering the film was based around Estella (AKA Cruella), a wannabe fashion designer, the movie, of course, featured a variety of stunning costumes. And we can thank the Oscar-winning Jenny Beavan for those costumes.

Related: The ‘Cruella’ Cast May Be on Board For a Spinoff

Variety released an exclusive article in which Beavan explained what happened with the new Cruella-inspired collection released by Disney — without her knowledge. Per their report:

During production of “Cruella,” Beavan recalls there had been some talk of working with Disney on co-branded products for Target and Singer sewing machines. There was also discussion about a possible fashion collection. But production ended, the pandemic hit and suddenly Beavan had more important things to worry about, like whether she’d ever work again. “Because I’m 70, I didn’t think I’d get insurance. And a lot of producers were saying, ‘You know, we may never be able to make films again.’”

As the time passed, Beavan said she never heard anything else from Disney about merchandise or licensing and she, honestly, forgot about it. That is until she saw an Instagram post from fashion brand Rag & Bone showcasing their new “officially licensed Cruella collection”. Variety‘s report continued:

Beavan, who says she didn’t hear anything more from Disney about merchandise or licensing, promptly forgot all about it. Then, last month, a friend sent her an Instagram post from fashion brand Rag & Bone, advertising their new, officially licensed “Cruella”-inspired collection and asking if she was involved. It was the first she had heard of it.

“I just was sort of horrified,” Beavan tells Variety from her London home, where she is currently at work on the “Mad Max” prequel “Furiosa.”

“The thing about ‘Cruella’ is that you’ve got a film about fashion, about two fashion designers. The whole story is them almost having a war using fashion. So, that’s so disrespectful to then bring out fashion lines,” notes Beavan.

Beavan is left feeling “horrified” and “disrespected” after finding out about the new collection without being informed about it by Disney directly. Disney did not respond to Variety’s request for comment. The Costume Designers Guild noted in Variety that this is, historically, a “huge issue” for costume designers. But Beavan acknowledged that designers like her “basically do sign [their] life away.” Still, costume designers want credit (and even compensation) for their work, even when it is used in merchandising.

Jenny Beavan is an Oscar-winning costume designer and has been nominated 10 times including for best costume design at the Academy Awards. Beavan has won twice — Once for A Room with a View and another time for Mad Max: Fury Road.

Did you love the costumes in Cruella? What do you think about this situation? Let us know in the comments below.