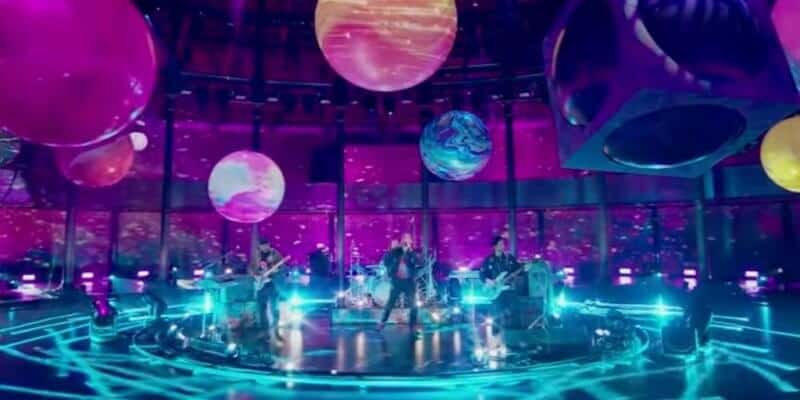 Grammy Award-winning British rock band Coldplay has been around since 1996, when they formed in London.

The band consists of lead vocalist, rhythm guitarist, and pianist Chris Martin, lead guitarist Jonny Buckland, bassist Guy Berryman, and drummer Will Champion. The foursome met at University College London and were known as Pectoralz, then Starfish, from 1996-1998.

They then changed their name to Coldplay and began the upward trajectory they’ve been on for the past 25 years under the direction of creative director and former manager, Phil Harvey.

Now, Martin — who was formerly married to Iron Man trilogy and Avengers actress Gwyneth Paltrow (Pepper Potts) — has spoken out about the inspiration for Coldplay’s ninth studio album, and it comes from a surprising source.

“One time I was watching ‘Star Wars’ and they had the scene with the Cantina band right? And I was like: ‘I wonder what musicians are like across the universe?’ and that led to this whole thing and now here we are.”

Coldplay recently dropped the music video for their new single, ‘Higher Power’, which sees the band perform on the planet of Kaotica, which is “populated by robot dogs, giant holograms and a street-gang of dancing aliens”.

The Coldplay lead vocalist also shared more details about the fictional Star Wars-inspired alien planet he created — it sounds a lot like Pantora to us:

“It led us to imagining this whole other place called ‘the spheres’, which is like a group of planets, like a solar system with lots of different places and creatures and stuff.

“And what I found is when you’ve imagined a place like that, you can sort of become any artist within that.

“It’s a very freeing thing to take yourself out of Coldplay and just think: ‘OK, I’m not even human, what does music sound like?”

The ‘Yellow’ hitmaker also revealed the upcoming record could be one of the last that Coldplay releases, as he doesn’t think the band have much time left before they “stop making albums”.

While Martin didn’t specify if he was watching the cantina scene in George Lucas’s original trilogy or in Disney’s sequel trilogy, it’s still fascinating that Coldplay has created not only a record, but an entire universe, inspired by the Star Wars galaxy.

Although the multi-platinum musician didn’t confirm that the Star Wars-influenced record will be the band’s last, he did heavily insinuate that their career together is winding down. No matter what happens next for Coldplay, they have had an incredible run:

Coldplay has sold more than 100 million records worldwide, making them one of the world’s best-selling music artists. They have won numerous awards throughout their career, including nine Brit Awards, seven MTV Video Music Awards, eight MTV Europe Music Awards and seven Grammy Awards from 35 nominations. The band’s first three albums — Parachutes (2000), A Rush of Blood to the Head (2002), and X&Y (2005) — are among the best-selling albums in UK chart history.In December 2009, Rolling Stone readers voted the group the fourth-best artist of the 2000s, and Q magazine included the group in their Artists of the Century list.