Disney Cast Member Picks Amazing Time to Propose to His Girlfriend! - Inside the Magic 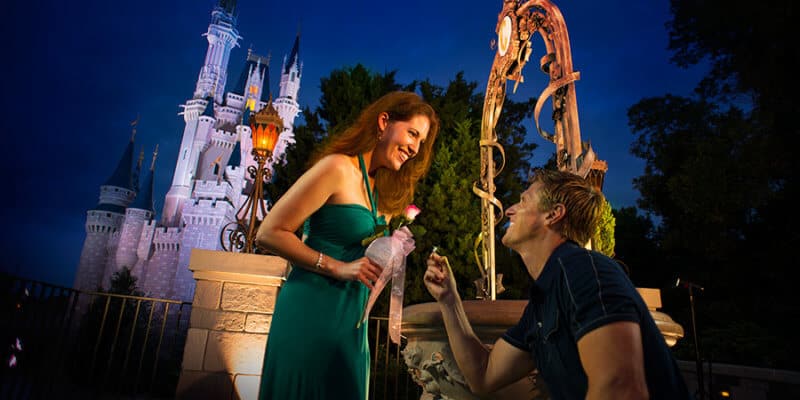 A lot of magic is making its way back to the Walt Disney World Resort — from the return of character dining to Cast Members once again throwing out the first pitch at the newly reopened Casey’s Corner, and culminating and what may be a top Disney World experience, its nighttime fireworks spectacular.

On June 29, Magic Kingdom Park welcomed thousands of Disney World Cast Members to enjoy a special preview of the Happily Ever After fireworks before the show returns nightly for Guests on July 1. Fireworks have been suspended at the resort since it opened last summer after the pandemic shutdown.

Cast Members were excited to see fireworks return to the Most Magical Place on Earth and flocked to the Magic Kingdom to secure their spota in front of Cinderella Castle. However, one Cast Member took the special night and truly made it his own. The unknown Cast Member waited until the end of the beautiful nighttime show when spirits were high and took the opportunity to propose to his girlfriend.

Twitter user Tharin White (@TharinWhite) was at the theme park and captured the Cast Member and his own happily ever after moment.

A cast member engagement just happened, here at the first showing of #HappilyEverAfter since the closures last year. #DisneyCastLife

A cast member engagement just happened, here at the first showing of #HappilyEverAfter since the closures last year. #DisneyCastLife pic.twitter.com/m5jrsFwJhX

In the true Disney spirit, Cast Members watching the adorable proposal were quick to cheer when the shocked woman said yes. What an incredible way to top an unforgettable night! While fireworks proposals are not uncommon, this was truly one special night to propose that this future groom picked!

Happily Ever After will run nightly — weather permitting — at Magic Kingdom park until October 1. At that time, a new fireworks show called Disney Enchantment will begin to celebrate Disney World’s 50 Anniversary. Disney Enchantment will run through the end of the anniversary celebration in 2023. There is no word as to whether or not Happily Ever After will return after that.

Join us in sending our biggest congratulations to the happy couple, and we wish them a lifetime of Disney magic and happiness!

CLICK HERE to book your own magical Disney vacation today with our friends at Academy Travel.

Comments Off on Disney Cast Member Picks Amazing Time to Propose to His Girlfriend!