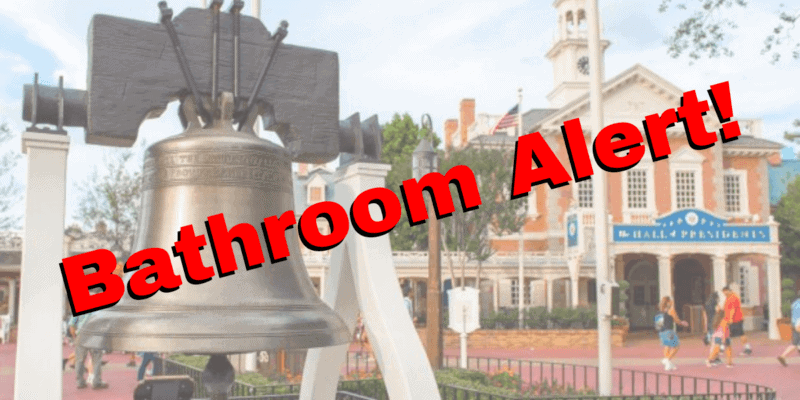 When ya’ gotta go, ya’ gotta go. While Walt Disney World offers its Guests restroom opportunities around every corner, there’s an old adage that Liberty Square has no bathrooms! But that’s really only partially true. Here’s where to find them, and how to use the two theme park bathrooms in Liberty Square!

There Really Are Two Bathrooms in Liberty Square

Liberty Square is famous for its “poo river” racing down the middle of the walkway, reminiscent of the colonial-America chamber pot waste that was dumped into the streets and flowed down the center. Disney Imagineers included the river of poo via a brownstone walkway that flows through the land.

In step with that theme, you won’t find public indoor plumbing restrooms anywhere in the land, either. Tourists are eagerly pointed to the large swath of facilities on the edge of Frontierland and the Tangled bathrooms at the back of Fantasyland (both touch Magic Kingdom’s Liberty Square’s boundaries). Pro-tip: Charge up your cell phone at these Disney bathrooms.

BUT(T) there are two bathrooms in Liberty Square if you know where to look and are in the appropriate right to use them. Due to codes, there must be available/close by bathrooms to Guests in a restaurant. With an American History land that famously boasts no bathrooms, this would be a problem if it weren’t for these nearly-secret upstairs locations.

Remember that you can only use these two restrooms if you are a Guest of the restaurant. Otherwise, you will need to visit the Frontierland or Tangled bathrooms for your needs!

The Boundaries Show The Bathrooms!

If we draw the “boundaries for Liberty Square” (one of the smallest lands in Magic Kingdom) we see that the Liberty Tree Tavern bathroom (which is just above the lobby of the restaurant) is clearly within the boundaries of the colonial times land, no matter how to try to slice it up (mid-spokes, along pathways, or splitting buildings). This reporter would prefer to draw boundaries that encased entire buildings whose doorways are in a certain land. It feels wrong to be inside the Hall of Presidents but claim to be in Fantasyland…just no.

If you happen to be on a Magic Kingdom tour — such as the Keys to the Kingdom Tour — you may hear the Cast Member claim that the bathrooms are actually in different lands and not in Liberty Square at all, but if you remember the above map… that’s just not the case for Liberty Tree Tavern at all.

The purple line draws a line from the same “spoke” start point and goes directly between Haunted Mansion attraction and the Tangled Bathrooms, but it cuts off over half of Columbia Harbor House and the backside of Memento Mori… Even though this purple line marks the bathroom in Fantasyland, this reporter won’t accept that because of the building hack.

Next, we meet mostly in the middle with the blue line, another option from the mid-spoke to the Peter Pan point. But this line cuts off more related Disney Property like the Hall of Presidents, half of Sleepy Hollow, and some Columbia Harbor House. It just won’t do.

We’re going to stick with the red line, which even as a straight line, goes more closely to the border of the buildings, therefore landing the Columbia Harbor House bathroom in Liberty Square.

So if you’re ready to use one of these loo stations, here’s what you can expect.  Visiting the Liberty Tree Tavern for a scrumptious Thanksgiving-style meal?  You might need the facilities between courses, and for that, you’ll just need to step upstairs to the two-seater restrooms, complete with a copper sink.  There are men’s and ladies’ rooms across from one another, but the upstairs “hallway” is very small, so be courteous of your neighbor!

If you find yourself smack dab between a lobster roll and a bowl of clam chowder, the Columbia House Harbor restrooms are what you need! Though the Tangled bathrooms are nearby, there is another restroom upstairs in this building, akin to the Liberty Tree Tavern. Check out these dated yet period Disney Park bathroom mirrors!

As Paul Revere called one if by land and two if by sea, hang your lanterns out for the travel professionals at Academy Travel. They know you have to go go go on vacation, and they can help you aim high for a trip you can roll with. Contact them at 609-978-0740 and get ready to have a faucet-nating vacation!

Have you used either of these Bathrooms in Liberty Square? Leave us a comment below!

Comments Off on Yup! There Really Are Two Bathrooms in Liberty Square