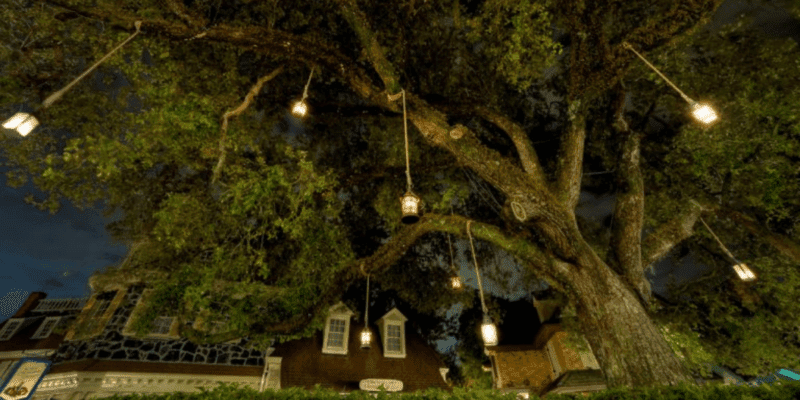 Live Oak trees are native to the southern American states, including Florida, but just how did the massive Liberty Square Tree arrive at Magic Kingdom? With over 175 years under its belt, the oak certainly wasn’t growing naturally in this Colonial America-themed area of the park… and it must have been huge at the time of planting… so how did they do it? The unusual method may surprise you, and horrify some horticulturists!

Back in the “revolutionary” times of 1765, the Sons of Liberty began meeting under an elm tree (the original Liberty Tree) in Boston, Massachusetts to protest the Stamp Act. These same protests lead up to the American Revolution, and this very tree became known as the “Liberty Tree.” Other Patriots across the other colonies began identifying local trees as Liberty Trees! Walt, being enchanted with this idea of independence and meeting place combined, wanted the same touch of American History for Liberty Square.

The massive tree was actually growing on Disney property, as the Liberty Oak is native to Florida but was nearly 7 miles from where the Imagineers wanted it staged. At the time of its selection, the Liberty Square tree was over 60 feet tall and weighed over 35 tons. I’m sure that the horticulturists never thought it could be moved! But Walt Disney’s hand-chosen landscaper, Bill Evans, brought ideas from Disneyland that made moving the hefty hardwood easier.

The Horticulturist turned Imagineer explained in an interview with the Disney History Institute the winsome account of how he developed the technique:

“When Disneyland was only a couple of years old, Walt decided that the African Coral Tree growing at the Polynesian Terrace was not big enough to carry a vast assortment of sound and lighting equipment and other paraphernalia that represented a good deal of weight.

So he wanted the Coral Tree out and an artificial tree in–a constructed tree. I don’t know whether or not you could invoke the poem ‘Only God Can Make A Tree,’… but Walt made a tree… [Laughing] and it was quite a satisfactory tree.

In order to not lose the tree that occupied the sight, we needed to find a way to get the tree out. We could not get a crane strong enough to lift it out of there if we had put a conventional box on it. We took a calculated risk and propped the tree up with some 6 x 6 timbers under the branches to carry its weight and proceeded to placer mine, with a firehouse, all the real estate until we had it suspended from its branches.

Then we went around with pruning sheers and reduced the root system to something we could handle. Now we were afraid we would crush the sensitive cambium—which is the film that is the life blood of the tree or any tree—which lies just under the bark.

So rather than seizing it around the throat, so to speak, we bored a couple of holes through the trunk—one north-south and one east-west—and put some inch and a half steel through the trunk and thus provided a convenient handle. We then picked the tree up by these steel pins and transported it. And now you see it weighed about one-fifth of what it would have weighed.

We ended up doing several hundred trees that way. I don’t think that anybody ever attempted this before—it was the kind of latitude that Walt gave us.

Due to its success we carried the method down to Florida where the local nurserymen and landscape people were absolutely horrified, including the professional pathologist from the University of Florida I might add. He predicted our trees would die in two years if we bored a hole through them. And we must have moved a thousand trees that way in Florida, all kinds of trees including the Liberty Tree. [Laughing] And hardly any of them died.”

And he was right! The tree never faltered, and though some rot has been replaced with cement and the “plugs” swapped out at least once, the tree continues to thrive.

In order to get a good look at this tree, head to the Liberty Tree Tavern, (the Walt Disney World Restaurant named for this liberty oak!) and read the plaque at its base. Then, head into the restaurant for a dinner meal inspired by colonial times, featuring family-style servings of Thanksgiving Dinner-like entrees and sides. Pro Tip: Save room for the Ooey Gooey Toffee Cake served in a skillet to share!

The Liberty Square Tree Lives On

Did you know that the Oaktree acorns that fall from this tree are collected? Over 500 trees have been planted with these seeds, sharing Disney World’s legacy with the planet. It should be noted that there are also two much larger (older) trees being cultivated from these acorns in case this tree falls ill or something else happens. While the “new” tree wouldn’t be quite as large or as old, it would still originate from the first Liberty Square Tree.

Have you visited this ancient tree in Magic Kingdom’s Liberty Square? Leave us a comment about why you love the Liberty Square Tree at Walt Disney World Resort!

Comments Off on Moving Time? How The Liberty Square Tree Got to Magic Kingdom