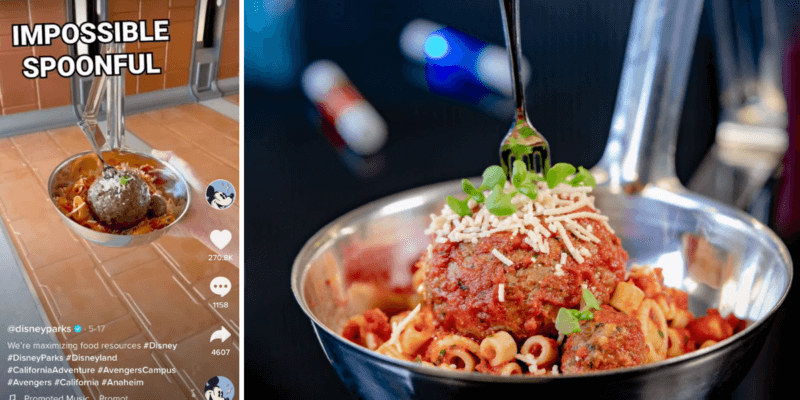 An eye-catching food item served at the all-new Disney super hero land Avengers Campus has the internet buzzing with questions. In particular, fans want to know if the giant spoon that the meal is served in is actually a Disney Park souvenir.

The Impossible Spoonful is one of the many creative meals served at Pym Test Kitchen in Avengers Campus, the new Disneyland Resort land where you can live out your Marvel dreams. Fitting with the theme of the restaurant, the Impossible Spoonful is a plant-based pasta dish that includes one giant meatball and one much smaller meatball. Along with a miniature fork, the dish is served in a giant spoon. Take a look:

One Disney fan posted in a since-deleted TikTok video that on a recent visit to Avengers Campus at Disney California Adventure, they thought that the giant spoon that their meal was served in was actually a souvenir. After finishing their food, they wiped off the spoon, packed it up in their backpack, and went about their day at DCA. Later on, the Guest realized that the spoon was not, in fact, meant to be a complimentary souvenir, and other Guests were not taking the giant spoon with them when they finished their food.

But this Disneyland Resort theme park Guest isn’t the only person tempted to take the giant spoon home with them. On nearly every photo and video about the Impossible Spoonful, people are asking if the giant spoon is a souvenir that comes complimentary with the meal.

If you take a look at the TikTok below, several commenters are asking whether you get to keep the giant spoon when you order the Impossible Spoonful:

The larger-than-average spoon that the Impossible Spoonful is served in is part of the theme of the restaurant. It is as though the scientists at Pym Test Kitchen used Pym particles to turn a regular-sized spoon into a giant spoon. Instead of serving this dish on a regular plate, it is served in a giant spoon — making it a “spoonful” of pasta, get it?

But just like any other dish at Disney, unless your food or drink comes in a to-go container, or you specifically order a souvenir item, you cannot keep the dish that your meal is served in. So, when you visit Avengers Campus, don’t steal the giant spoons! The giant spoon is not a souvenir, and as soon as you finish your meal, you are to leave the spoon on Disney property.

It doesn’t come as much of a surprise for Disney fans to want to take home the giant spoons from Avengers Campus. When Star Wars: Galaxy’s Edge first opened, a number of Guests stole the sporks from Docking Bay 7 Food & Cargo, which were not meant to be souvenirs. Many of the sporks were even listed on eBay for high prices, when they weren’t even meant to be sold — let alone stolen — in the land in the first place. Later on, Disney brought back the sporks to be sold as a souvenir item due to popularity. However, the company hasn’t given any indication that the giant spoons from Pym Test Kitchen will become purchasable souvenirs.

Have you visited Avengers Campus yet?