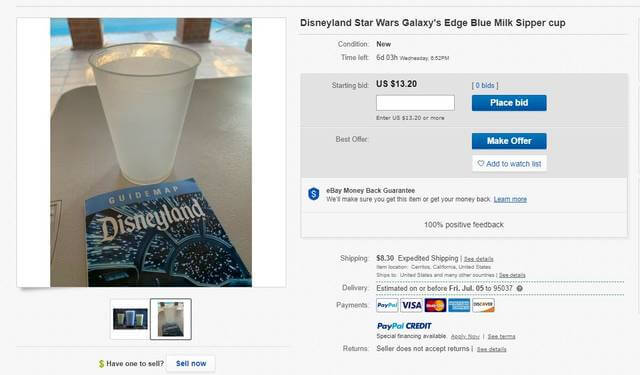 Fans everywhere have been going crazy over Star Wars: Galaxy’s Edge. However, it seems some might be taking advantage of all the hype and are trying to cash in on the intergalactic land by selling their used utensils and plastic cups from their own time in Galaxy’s Edge.

Got $10? If so, you may be able to get yourself your very own used Blue Milk cup from Star Wars: Galaxy’s Edge at Disneyland! Note: the cup comes used and without any blue milk or real reason for its purchase.

This listing, and many others like it, have begun popping up on eBay for everything included in the land, including more higher sought after items such as limited edition T-shirts and custom lightsabers.

Special attire and souvenirs from the land seem more than reasonable enough to appear on third party sites such as eBay. However, items such as used plastic cups and utensils seem somewhat out of the ordinary.

According to The Tribune, there were at least five listings for empty plastic cups from Galaxy’s Edge on the e-commerce site as of last Thursday. To clarify, these cups are not re-usable or decorated in any capacity but are merely one-use, clear plastic cups that one might find at their local grocery store.

One listing for a “Disneyland Star Wars Galaxy’s Edge Blue Milk Sipper Cup” read: “This was the cup that held the blue/green milk.” The attached photos show promotional images for Blue Milk, followed by a picture of an empty plastic cup.

For those not familiar with the land, Blue Milk in Star Wars: Galaxy’s Edge sells for $8, which is less than half the price of the combined total of this item’s starting bid and shipping rate.

For those excited for the specially designed Coca-Cola bottles found exclusively in the land, they can purchase them in a pack of forty for $999. Unlike the plastic used blue milk cups, these do come with a beverage inside.

Technically, the almost one-thousand-dollar price tag comes at somewhat of a bargain as the unopened drinks are selling for anywhere between $13 and $30 per bottle on eBay.

One other listing that stands out from a slew of other Galaxy’s Edge merchandise includes the land’s sporks, which have become quite a favorite among many “Star Wars” fans.

This cult favorite has been found on eBay selling for upwards of $90. Yes–you read that right. The utensils premiered with the land and fans became quite excited and soon began stealing them and selling them online. It’s been found that the utensils are no longer available in the land. It seems most of them have found their way to eBay.

Some other items found on eBay at quite a substantial markup include the following:

Oga’s Cantina Menus: Just as you might have expected, these are only menus, similar to what you would find in most other restaurants. However, they’ve been found online for prices ranging as low as $25, while others have been asking for as much as $300.

Oga’s Cantina Rancor Beer Flight Board: As we previously reported, Oga’s Cantina offers a beer flight that runs for $75, which comes with a special themed board in the shape of rancor teeth. It seems some have decided to sell the board and its glasses online and listings show them going for anywhere between $61 and $300.

Kowakian Lizar-Monkey: This is a cackling animatronic shoulder pet found in The Creature Stall for $70. Well, some are selling them online for anywhere between $125 and $299.

Entrance wristbands: During the land’s reservation period, visitors were given wristbands to mark their entrance and exit time into the new land. With an item like this, you’d assume one might keep it as a fond memory. However, some have found a way to monetize their memories of the first time they entered the land and depending on how worn the bands are, some are getting anywhere between $5 and $30 per band.

What are your thoughts on fans selling some of these unusual items from their visits to Star Wars: Galaxy’s Edge? Let us know in the comments below!