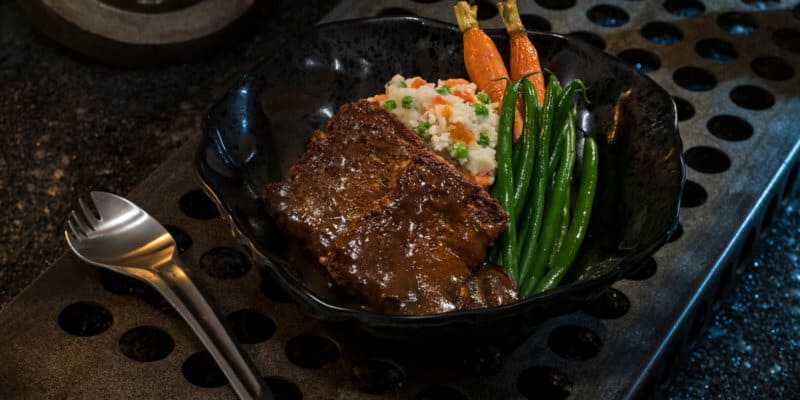 Remember when Galaxy’s Edge first opened and we all thought it was crazy that guests were stealing the sporks from Docking Bay 7 Food and Cargo and selling them on eBay? Well, apparently Disney saw this as an opportunity and have now started selling the famous spork in Galaxy’s Edge. Yes, seriously!

Disney originally removed sporks from the parks as so many of them were being stolen but now it seems they have the perfect solution to those guests who want to eat in style at Galaxy’s Edge.

Fear not, you aren’t just paying $10.99 for a metal spork. The spork also comes in a handy travel bag that has the Galaxy’s Edge logo on it alongside writing from the native planet of Batuu. Naturally, I’m just going to assume that the writing says spork…

Currently, the spork is only available for sale in Disneyland. There’s no word on when and if Disney’s Hollywood Studios is going to be receiving the spork just yet, but we wouldn’t be surprised if we saw it on the menu soon. You can purchase the spork directly from Docking Bay 7 Food and Cargo.

Here is it on the menu:

Personally, I feel that almost $11 for a metal spork (travel bag aside) is a little on the steep side. That being said, when these sporks were being sold on eBay by themselves, there were some users who were purchasing them for over $80! Clearly the market is there for alien looking sporks and they just aren’t for me. I mean I guess you’re getting two utensils in one, that counts for some of the cost, right?

If all else fails, technically Black Spire Outpost is a market, do you think cast members would allow us to haggle on price? Perhaps not…

Would you purchase a spork from Galaxy’s Edge at a cost of $10.99 or do you think this is one merchandise item to far? Let us know in the comments below!