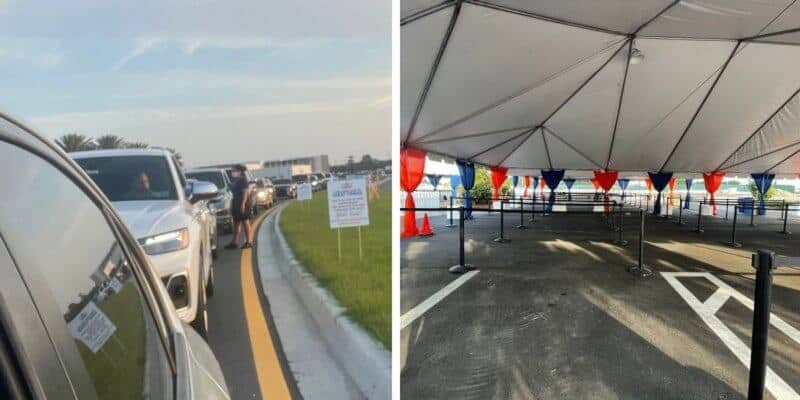 After 50 years, White Castle has finally found a home in Central Florida. Considering it is the largest White Castle in the world, and that it is placed in one of America’s top tourist destinations, and that the ghost kitchen which opened a few months ago had to close due to intense demand and not enough space, it was easy to predict that lines were going to be lengthy.

When Inside the Magic spoke with White Castle Vice President Jamie Richardson, he told us that they were anticipating large crowds and had lines set up in the parking lot to keep things organized, almost like a Disney World ride!

That being said, no one could have anticipated the line-ups that occurred not only in person but for the drive-thru of White Castle, now that the location has opened today.

Finally opening day @WhiteCastle! Definitely thousands people here already at 7am. Parking is full and drive thru line is huge lol. Been here since 6:30am.

Finally opening day @WhiteCastle ! Definitely thousands people here already at 7am. Parking is full and drive thru line is huge lol. Been here since 6:30am. pic.twitter.com/I4SkECTQIh

John (@DotDotDot_John) proved the length of the White Castle line through a video, and it was intense with cars lined all the way down the road out of the lot at 9:00 am this morning.

JEFRE (@jefre_artist) also showed a video of the four-hour wait that Guests of White Castle were willing to wait.

From this, we can clearly see how strong of a demand there is for White Castle in Orlando. It is also great to know that once the location has its bearings, the restaurant will be available on Uber Eats and will be open 24-hours a day, which means Disney World Guests will have a fantastic late-night snack option at all times!

How long would you wait for White Castle?