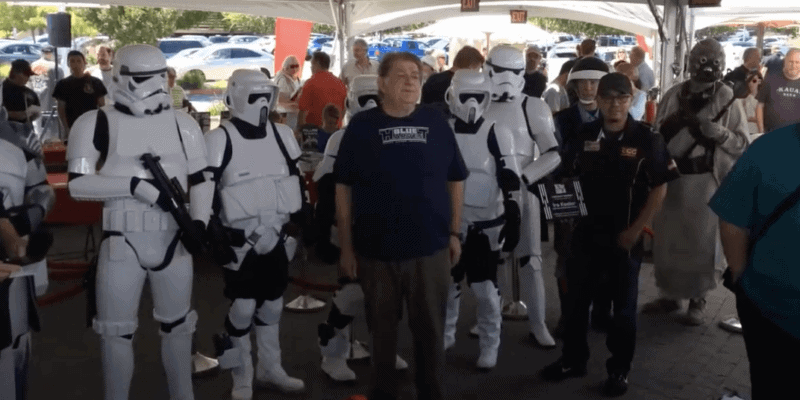 When you think of some of the biggest movie franchises of all time — Star Wars, Back to the Future, Jurassic Park, and Indiana Jones — you might not realize that there’s one man who tied them all together, and made them come to life. Ira Keeler was a skilled modelmaker who worked with Lucasfilm’s special effects division, Industrial Light & Magic (ILM) for decades.

Keeler, described by ILM as a “master” at his craft, sadly passed away on April 15 following a long illness. His exact cause of death is undisclosed at this time. Keeler was 80-years-old.

Now, just over a month later, the Star Wars modelmaker has been laid to rest. True to form, his burial paid tribute to a galaxy far, far away with members of the 501st Legion standing by his casket throughout his graveside service.

Per an article in Keeler’s local Vacaville, CA newspaper, The Reporter:

…[Keeler’s wife said] around 1981, Keeler was looking for an outlet for his model making skills, which led to a job at ILM. Around the time, staff were working on the effects for “Return of the Jedi,” where he brought his woodworking skills. Among other things, Keeler helped create the designs for the Red Guards, various weapons and spaceships and the scout troopers, variations on the Stormtroopers who were stationed on Endor.

“Somebody had to carve those helmets in wood,” Lorne Peterson, who was the longtime head of the model shop at ILM, said. “Ira was the person who carved those kinds of things…He was an incredible carver. You don’t realize how hard it is to make things totally symmetrical when you’re just doing it by eye, but Ira was the one that carved those things.”

Related: George Lucas Funded the Most Iconic Sequel of All Time By Himself

Keeler was also honored by the official ILM website with a tribute post. The memorial paid homage to his dedication to his work — and his love for creating models of all kinds, even after he officially retired from ILM in 2002.

Ira’s contribution to Star Wars continued with his work on the prequel Episodes I and II after which he retired from the model shop and dove headlong into passion projects and hobbies such as, designing and hand-crafting beautiful model rockets and restoring model trains to absolute perfection for collectors the world over.

To know Ira was to love Ira. His generosity in sharing his craft and his decades of experience with any artist that showed interest was a hallmark of what made and continues to make ILM, ILM. Ira’s DNA, like so many amazingly talented individuals who have done some of their life’s best work at ILM, continues to touch every project the studio contributes to, and for that, we are honored.

In addition to Keeler’s work on the Skywalker Saga, he helped bring the Star Wars universe to life in Disney Parks, assisting with the creation of the original Star Tours ride.

Below, you can watch a video of Keeler’s honorary 501st Legion induction: