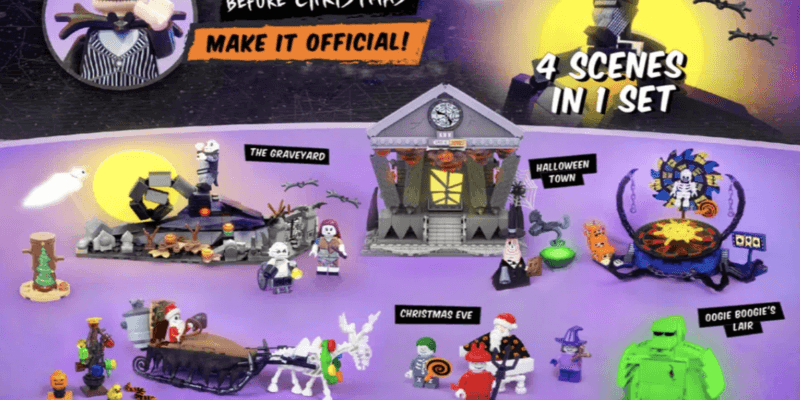 Have you ever dreamed of owning a Nightmare Before Christmas LEGO set? Well, you could be in luck.

Right now, a LEGO fan is pitching their idea to the company itself.

With the right amount of support, this concept could become a real set. But the designer needs your vote to make that happen!

Nightmare Before Christmas LEGO is a dream come true

The Nightmare Before Christmas (1993) is a Disney classic, known for its dark imagery and practical special effects. The Tim Burton produced film turned into a cult phenomenon, and now Jack Skellington branded merchandise is everywhere.

It’s kind of amazing that the film hasn’t already been turned into a LEGO set. However, user LegoFan_506 on the official LEGO Ideas website has sought to make this a reality by designing a very impressive set.

The collection features four scenes from The Nightmare Before Christmas. The first is at the graveyard where Jack (Danny Elfman) sings “Jack’s Lament” in front of the iconic yellow moon. It also features minifigs of Sally, Zero, and Dr. Finkelstein. The next is during the song “Kidnap the Sandy Claws” and features Jack as Santa Claus as well as Lock, Shock, and Barrel.

Set number three is a recreation of Halloween Town, as seen in “This Is Halloween” and features the Mayor. Finally, we get Oogie Boogie’s lair with a buildable Oogie Boogie himself.

How you can support the set

If you want to own this LEGO set yourself, you’ve got to get voting. The LEGO ideas blog allows fans to pitch ideas based on famous properties such as Disney. However, their ideas will only get greenlit after they’ve received a certain number of votes.

Right now, the Nightmare Before Christmas LEGO set has 464 days to get 5,000 votes of support. It’s currently gained 1,820 supporters. Head on over to the LEGO Ideas blog to voice your support for this incredible set today.

If it does get picked up, you could be instrumental in bringing Jack Skellington, Sally, and Zero to brick form!

The Nightmare Before Christmas remains an iconic favorite

Disney fans clearly have a taste for the macabre. The Nightmare Before Christmas is a dark fairytale in a similar way to The Haunted Mansion attraction and another Tim Burton movie, Corpse Bride (2005). However, it should be noted that Tim Burton produced, not directed this film. Henry Selick was the director. Sadly he doesn’t seem to get enough credit, as most incorrectly think it was entirely a Burton production!

The combination of the eerie characters of Halloween Town with the bright lights of Christmas Town makes it truly unique. However, it’s composer Danny Elfman who really steals the show, as he also voices Jack Skellington himself.

With the exception of the Christmas Town scenes, the movie is likely one of the darkest made by Disney. Yet, that hasn’t stopped Disney fans around the world from obsessing over all things Nightmare related. Why do you think the Nightmare Funko pops are so popular? With the popularity of the movie, it’s little surprise that it has become a mainstay at Walt Disney World and other parks around the world.

If you fancy seeing this classic movie immortalised in LEGO, be sure to give it your support!

Do you like this Nightmare Before Christmas LEGO set? Let us know in the comments below.