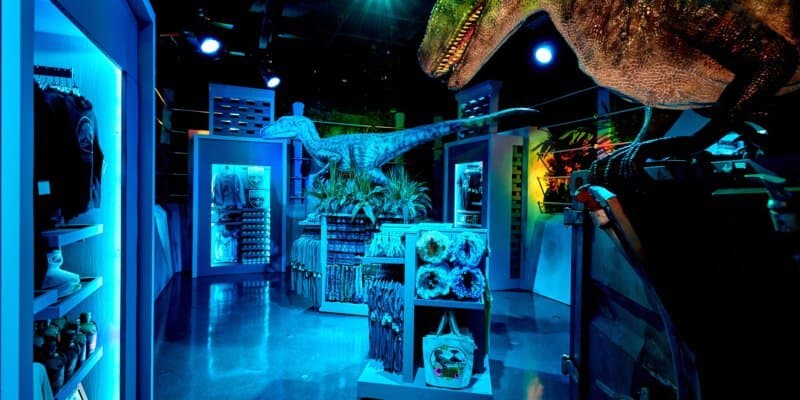 Ahead of the grand opening of the VelociCoaster at Universal’s Islands of Adventure on June 10, Universal is opening a brand-new Jurassic World-themed tribute store!

The tribute store will be opening on May 27, and Universal shared a behind-the-scenes look on their Instagram today of the store — Let’s check it out!

It is no secret for Universal fans that they know how to make incredibly themed shopping experiences. The tribute stores are found in the New York section of Universal Studios Florida. We have seen tribute stores for Halloween Horror Nights, Mardi Gras, Christmas, and now in celebration of the grand opening of the VelociCoaster!

Here is some info that Universal gave us about the tribute store which will feature three uniquely themed rooms:

Featuring highly-themed rooms inspired by the blockbuster films, including the Control Room, Raptor Paddock, and Lab – theretail location will be the one-stop-shop for guests to stock up on all of their Jurassic World gear, such as apparel, collectible items, themed food and beverage and more. Guests can also browse new collections based on Mr. DNA, the hit animated series – Jurassic World: Camp Cretaceous, and custom items made exclusively for Universal that can’t be found anywhere else.

Here is the video that Universal posted to their official Instagram showing us the first look inside of the store:

While the VelociCoaster doesn’t officially open until June 10, the new thrill ride has been holding technical rehearsals every day ahead of its grand opening. If you head to Islands of Adventure you may be able to ride the attraction while it is in this testing phase, this is not a guarantee, but it is an exciting possibility!

At Universal’s newest theme park, Universal Beijing Resort, a direct copy of Isla Nublar right out of the Jurassic World film is coming to the park when it opens later this year.

We cannot wait to see more Jurassic World come to the Universal theme parks all over the world.

Are you excited for the Jurassic World Tribute Store to officially open? Let us know in the comments!

We can help you book the perfect Universal Orlando Resort vacation, click here to learn more.