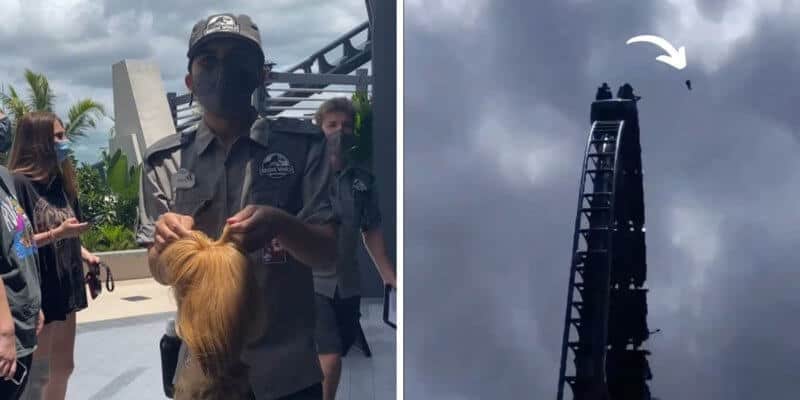 In case you missed it, last week, one Guest lost her hair while riding Jurassic World VelociCoaster at Universal Orlando Resort.

And yes, you read that correctly! Emi (@OfficiallyEmi) took to Twitter to post a video of a Team Member delicately returning her wig, as she lost it while riding the new coaster while bounding as Claire Dearing from the Jurassic World film franchise.

Although the original video was hilarious, which you can watch that here, we now have discovered that another Guest ended up filming the moment Emi’s wig flew off her head — and the timing is hilariously priceless.

For anyone who has yet to ride VelociCoaster, let us warn you, although the ride is smooth, it is incredibly intense, and unless your hair is securely fastened to your head, it will definitely fly off. Most recently, Universal (@UniversalORL) retweeted a Tweet from Gage (@GagesAccount), who tagged Emi in a video sharing the moment her wig flew off the attraction and into the raptor paddock. We suggest watching this full screen for peak laughter.

Universal hilariously added to the Tweet by quoting R. Kelly’s “I Believe I Can Fly” but changing the spelling of soar to something a little more dinosaur friendly.

This video was a hilarious way to continue telling the story of the flying hairpiece, as now, we can see that the wig left Emi’s head just as the Guest was about to go over the top hat of the attraction. Considering that moment experienced heavy G-force and had Guests flying out of their seats, we are not too shocked to see hair flying out of the seat as well!

As you can see from the above Tweet, this is not the first time Universal called out Emi for losing her wig at the attraction! After Emi posted about the Universal Team Member having to return her wig to her once she got off the attrition, Universal reTweeted her stating:

Universal even replied to Emi when she originally posted the video on Twitter, saying:

Hold onto your b̶u̶t̶t̶s̶ hair.

Hold onto your b̶u̶t̶t̶s̶ hair.

Even Emi is shocked at how popular the #VelociWig story has become, as she also posted the video of her hair flying off, stating:

I cannot believe this damn wig is gonna be my legacy.

I cannot believe this damn wig is gonna be my legacy.

So, if you plan on riding VelociCoaster, make sure that you have all articles secured, or else you may end up on Universal’s Twitter feed as well!

What do you think of this hilarious story? Let us know in the comments below!

Want to ride VelociCoaster this summer? How about a fall visit to Halloween Horror Nights at Universal Studios Florida or a visit to the Wizarding World of Harry Potter. Click here to book that Universal parks trip today!

Comments Off on Universal Shares Video of VelociCoaster Sending a Wig Flying!