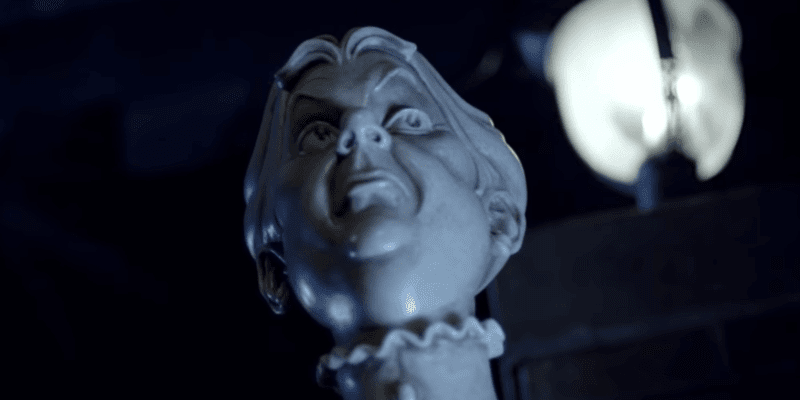 Please be aware, if you want to solve this ghoulish tale for yourself, there are spoilers ahead.

If you are a fan of all things The Haunted Mansion, you may already know that there is the ultimate murder mystery in the queue of the attraction at Magic Kingdom at Disney World. And, if you like a spooky gruesome whodunit, this is going to make you want to stand in that 75-minute queue on your next visit.

The Dread family’s murder story was added into the queue in the form of graveyard busts when the queue at Walt Disney World was re-themed to become more interactive. It also poses a new layer into the attraction if you really dive deep into the story, which is what we are going to do today!

Before we start at our first casualty, just know that every murder is going to be driven by greed. So clearly, we are about to explore a very healthy family relationship.

To solve the Dread family murder mystery, we must look at all the epitaphs on each character’s bust. Each will give us a clue as to what murder weapon was used, and on everyone else’s epitaph, we will then need to find that item to determine who killed who.

Let’s start with the first owner of the Haunted Mansion, Uncle Jacob.

“Greed was the poison he had swallowed. He went first, the others followed. His killer’s face he surely knew. Now try to discover who killed who.”

Uncle Jacob was clearly poisoned and this was so that the killer could inherit The Haunted Mansion and all of Jacob’s money. This proves that the mansion has had multiple owners (and not just the groom-to-be George Hightower) making the mansions backstory rooted even deeper in history, and shows us the key to uncovering the murder trial.
On each epitaph, there is a murder weapon listed which convicts the killer, so right away we need to look for poison…

“Avid hunter and expert shot, in the end that’s what he got.”

Bertie has the bottle of poison and killed Jacob likely to inherit the mansion and wealth. So that would mean Bertie had to be quite close to Uncle Jacob and someone who would directly inherit the home… like a son. Yep, Bertie was likely Uncle Jacob’s son, and that snake on his neck sure looks like it may have been poisonous. But Bertie’s reign does not last long since he was shot.

“Never did a dishonorable deed, yet found face down in canary seed.”

Aunt Florence is now our current killer with a pistol on her grave and was Jacob’s wife. So yes, this tale gets crazier folks because Florence murders her own son. So much for mothers’ love right?

Well, it does make perfect sense in terms of who would get the mansion next, being Bertie’s mom, Florence is likely the next heir. But of course, Aunt Florence can’t stick around long – and she’s found dead in birdseed.

The Twins: Wellington and Forsythia

“Departed life while in their beds, with identical bumps on their heads.”

And with the twins, we find our canary seed, both on the epitaph, and between the heads. Look closely, you’ll see a bag of birdseed! The Twins are the reason Florence and Jacob are named Aunt and Uncle, and with Bertie gone, the niece and nephew are the next logical heirs. But with a swift bump on their heads, the Dread twins were found dead.

“Our sleeping beauty, who never awoke the night her dreams went up in smoke.”

Cousin Maude has the mallet on her epitaph, so we know she is the final killer. The funny thing about Cousin Maude was that she wasn’t even a cousin! Maude was a nanny to the twins, but was so close to the Dread family she acquired the title of ‘cousin’, which leads us to understand why the mansion would be left to Maude after everyone else before he would die. But… Maude died, and there is no one else left to kill her. We can see that her death was likely due to fire from her epitaph, and if you go behind Maude’s head, you will see three matches hold up her hair.

At the end of The Haunted Mansion, we can see a photo of Maude holding the matches with fire around her. It looks like Maude may have not felt like she was really part of the family because she wanted to burn the place down. She decides she would rather kill the children than let the mansion stand. Of course, we know this didn’t work out according to plan, and Maude is the one who was left extra crispy.

So that’s it! That is the murder mystery in the queue of The Haunted Mansion at Magic Kingdom. There are lots of twists and turns and ways that the family integrates itself in the attraction’s backstory, and there is always more digging to be done, and more gravestones to add!

Below on the Disney Parks YouTube channel, you can see how the Dread family murder mystery was created, and what influenced this interactive element in The Haunted Mansion queue. Take a look!

Have you ever solved The Haunted Mansion murder mystery?

Comments Off on Guests Solve Murder at Disney’s Haunted Mansion