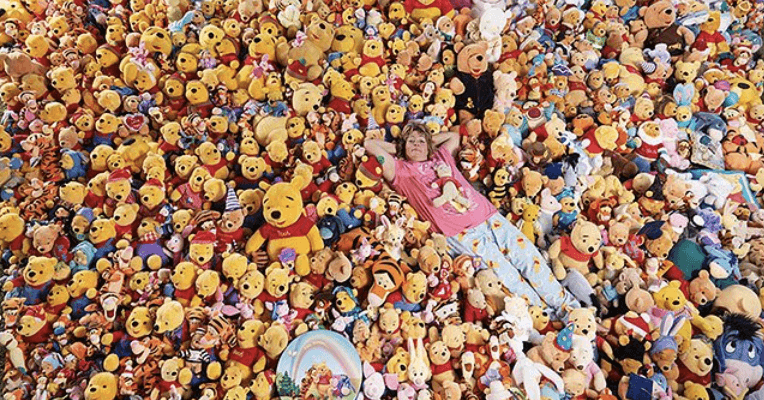 There are many adults and children alike who are huge Disney fans, but there is one ultimate fan when it comes to Winnie the Pooh.

If you love Winnie the Pooh and all the characters from the Hundred Acre Wood, you must see this massive collection!

When someone talks about Disney, there are so many images that may pop into a fan’s mind. Maybe you think of a certain movie or character, or perhaps you think of your favorite Disney park. For Winter Haven’s Deb Hoffmann, the love of Disney began with a bear.

The Orlando Sentinel recently shared the story of Deb Hoffmann, a Disney fan who has been collecting Winnie the Pooh memorabilia since she was 2, and is now the Guinness Book of World Record holder for the largest Winnie the Pooh collection, with over 20,000 items and counting spread across a variety of homes. And yes, you read that right, Hoffmann has 20,000 items made up of plushes, collectibles, costumes, and more, all themed to our favorite pals from the Hundred Acre Wood like Tigger, Eeyore, Piglet, Christopher Robin, and of course, Winnie the Pooh.

Deb (@mostpooh) took to Instagram to showcase the big accomplishment.

It is official! My record has been adjudicated by #guinnessworldrecord and I have broken my own record of the Largest Collection of Winnie the Pooh Memorabilia and go from 14,314 to …… 20,000. Thank you to everyone who helped me achieve my goal of 20K on 12/20 in 2020. #MostPooh

Many Disney fans have collections. Collecting pins is a popular option for many fans, as well as Wishables, Annual Passholder magnets, and more, but this collection is even more remarkable not just due to its size, but also the quality and range of items involved.

Hoffmann is 56 years young and has been a collector all of her life. She has held the world record for her Winnie the Pooh collection since 2008, and I cannot imagine anyone outnumbering her anytime soon!

Some of the coolest items in Hoffmann’s collections come straight from the Disney parks! Hoffmann has not one, but two different Winnie the Pooh costumes that were used at the Disney parks in the ’60s, as well as the ’70s through to the ’80s. Any Disney parks fan knows that seeing a Disney costume without someone inside is quite rare, especially to see such well-kept older costumes such as Hoffamans!

Hoffmann is looking to find a Winnie the Pooh prop used in a movie next, but until then, she will continue to enjoy the positivity that her collection brings to her.

“These days, there’s so much negativity,” she said. “When you look at the Winnie the Pooh stories, it’s always about the characters helping one another out. There’s some type of an issue, everybody comes together, and by the end of that story, things are positive again.

“When I look at the collection … it’s just simple. It’s just nice. There’s no drama here.”

Hoffmann enjoys visiting Disney World as well! The Disney fan has made over 70 trips to the Magic Kingdom, and has ridden The Many Adventures of Winnie the Pooh over 100 times, which is pretty impressive!

If you are an avid Disney collector, and you want something unique to add to your collection, next time you are in Florida, check out the Lakeland Antique Mall. Within the mall, customers can find a tonne of rare vintage Disney items. We have discussed one item in particular in the past, a ride vehicle from Snow White’s Scary Adventures at Disney World being sold for $50,000. Considering the attraction is extinct, this would be the perfect item for the right collector, and could serve as a centerpiece in any collection, much like Hoffmann’s Winnie the Pooh costumes.

Some Disney collectors who also love Winnie the Pooh go even more specific in their collections! All Thingz Pooh and Tsums (@allthingzpoohanstsums) posted a photo of a Winnie the Pooh pin collection, and there might not be 20,000 of them, but it definitely is impressive.

Hoffmann may be an ultimate collector, however, she is not alone! Guinness World Records (@guinessworldrecords) recently shared Paul, a Funko collector, who has a massive collection including many Disney characters.

Paul started his massive collection after receiving a two-pack for his birthday in 2007 – Hawkeye and Spider-Man from Captain American: Civil War

Of course, his collection is not as vast as Hoffmann’s, however, it does show that there are many Disney fans out there who have curated very specific collections that will blow your mind.

What Disney items do you collect? Let us know in the comments below!