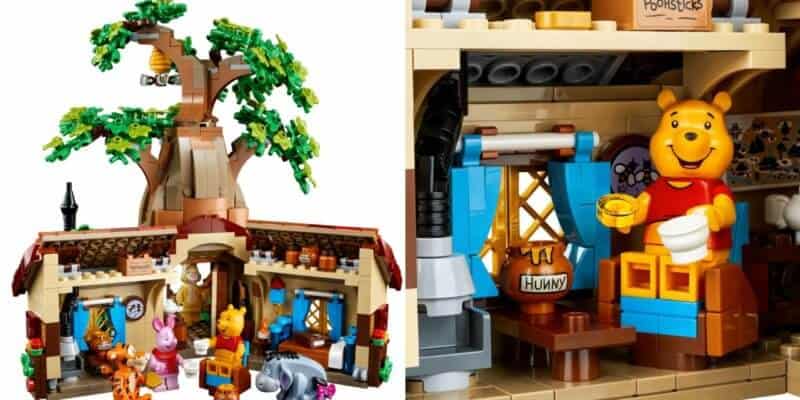 If you have childhood memories that involve you coming out of a tree and ending up in the Hundred Acre Wood where your stuffed animals can talk and come to life, then trust us, you are not alone. Winnie the Pooh is a character, story, and franchise that has shaped many childhoods, but we don’t have to be like Christopher Robin and grow up just yet.

It seems LEGO has created a stunning Winnie the Pooh set that is a part of the IDEAS collection. In this set, brick fanatics can go into the world of the A.A. Milne and Disney character, Pooh. The LEGO set features Pooh’s house, but also comes alongside some of his pals like Rabbit, Piglet, Eeyore, and Tigger! Oh, and don’t forget the giant pot of honey that gets revealed once Pooh’s LEGO house is opened up.

The Disney LEGO set for adults includes 1265 pieces within. The retail price is currently set at $99.99 and will debut on March 18, 2021, for VIP Early Access LEGO members. For the rest of the world, the set will be released publically on April 1, 2021. Some lucky Guests may even find it at the LEGO store in Disney Springs.

To purchase the Winnie the Pooh LEGO set on April 1, click here!

If you want more details on the new Winnie the Pooh LEGO set, the LEGO website has given a perfect description and introduction on what buyers can expect once this hits stores.

Take time out and rekindle joyful childhood memories with this LEGO® Ideas set (21326) featuring Disney Winnie the Pooh and a delightful LEGO brick recreation of Pooh Bear’s house under a big oak tree in Hundred Acre Wood. Great to build alone or with family, the house opens at the back for easy access to the authentic details inside, including Pooh’s buildable armchair, Pooh-Coo clock, Poohsticks, honey pot elements and much more. You can also create the effect of bees flying around beehives in the branches of the tree, like in the stories.

Popular characters
The model comes with Disney’s Winnie the Pooh, Piglet, Tigger and Rabbit minifigures, plus an Eeyore LEGO figure. The friends each have an accessory, including Winnie the Pooh’s buildable red balloon, to recreate classic scenes.

Special gift
Part of a collection of premium-quality LEGO building kits for adults, this set makes a charming gift for yourself, a Disney Winnie the Pooh enthusiast, LEGO fan or any hobbyist.

The set truly seems to be riddled in LEGO bricks detail and looks like the perfect activity that parents can do with their kids. It will not only incite nostalgia for the adults building Pooh’s home in the trees, but it introduces kids to the Hundred Acre Wood, keeping the story of Winnie the Pooh alive and fresh for incoming generations.

Winnie the Pooh is a popular IP when it comes to Disney collaborating out with other companies. The Winnie the Pooh Build-A-Bear collection has done incredibly well, too. If you want to learn more about those cute plush toys, click here.

Will you be keeping an eye out to see when the LEGO Winnie the Pooh set drops? Click here to be among the first to purchase!