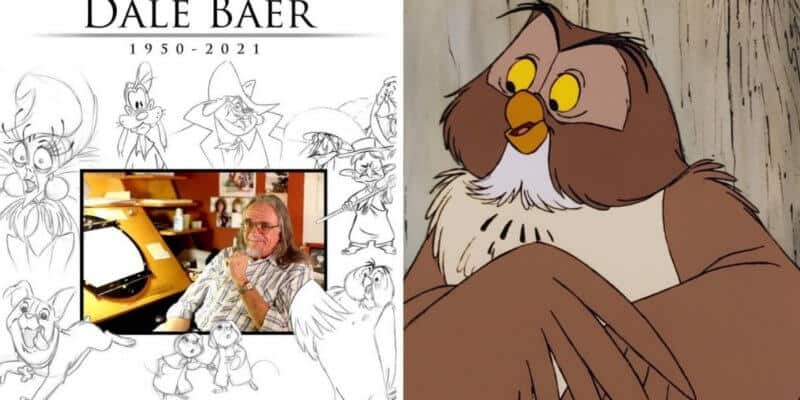 Inside the Magic is saddened to learn that legendary Disney animator Dale Baer has passed away. He was 70 years of age.

Many Disney fans may know Baer for his work on several different animated films such as The Lion King, The Princess and the Frog, Meet the Robinsons, Robin Hood, Home on the Range, Who Framed Roger Rabbit, Treasure Planet, Moana and others. He was also the supervising animator for characters including Yzma from The Emperor’s New Groove and Owl from Winnie the Pooh.

Additionally, Baer worked on some of the most iconic Disney shorts including “Get a Horse!” “How to Hook Up Your Home Theater,” and “Feast.”

The Disney Animator worked with six of Walt Disney’s legendary Nine Old Men and carried on their legacy through his own work. He went on to aspire many animators as he taught classes at CalArts and other institutions.

Over Baer’s animating career, he won several different awards including the Annie Award in 2001 and the Winsor McCay Award in 2016.

We are saddened by the passing of animator Dale Baer. He was the supervising animator on beloved characters including Yzma from Emperor’s New Groove and Owl from Winnie the Pooh. Baer’s first role at Disney Animation was as a trainee on Robin Hood and over the course of his career, he animated on films such as The Lion King, Treasure Planet, Home on the Range, Meet the Robinsons and The Princess and the Frog. His work can also be seen in shorts like “How to Hook Up Your Home Theater”, “Get a Horse!” and “Feast.” Having directly worked with six Disney’s legendary Nine Old Men (Walt Disney’s trusted and pioneering team of animation giants), he carried on their legacy in his own work, and through the many aspiring animators he so generously mentored at the Studios and through his classes at CalArts and other instituions. He was a great friend and will be deeply missed.

Our thoughts and prayers go out to the Baer family during this time.