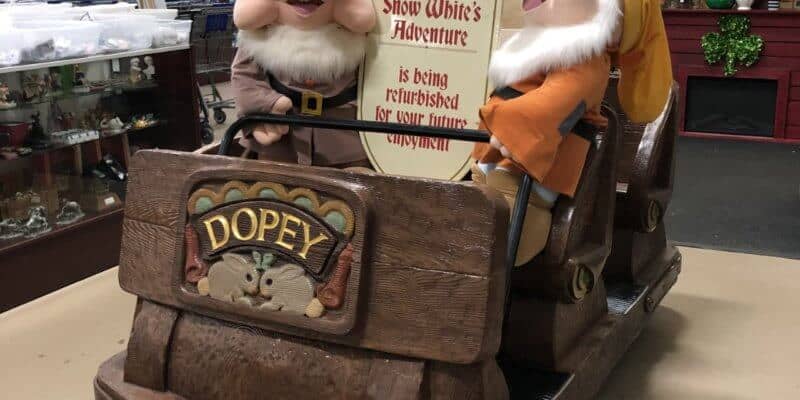 There are so many Disney collectors in the world — some collect Funko POPs, some love pins, and others practically hoard Minnie Mouse ears, but what about owning an actual part of a Disney theme park?

One antique shop in Lakeland, Florida has a bunch of goodies for any Disney collector, including a ride vehicle for $50,000!

Related: Bring Your Favorite WDW Resort Into Your Home!

If you are local to the Orlando area, you probably already know about the Lakeland Antique Mall. If you don’t, this is a massive collection of antique goods, and with close proximity to Walt Disney World, it is no wonder that they happen to get a lot of Disney goods at the store.

But, recently the store got in a special piece of Disney Park history! A ride vehicle from Snow White’s Scary Adventures at Disney World can now be yours for $50,000.

This piece jumped out at us since we know that the Snow White dark ride attraction has been gone from Disney World for a few years now as it was replaced by Princess Fairytale Hall at Fantasyland in Magic Kingdom.

You can still ride a Snow White dark ride at Disneyland which recently got a makeover and will be debuting with the reopening of Disneyland on April 30.

Inside the Magic got in touch with Phil, the manager of the Lakeland Antique Mall, and he gave us some insight on the Snow White ride vehicle:

“The car was purchased from a private collector in Los Angeles, who bought the car at a Disney Convention auction several years ago. The car was used at the Magic Kingdom in Orlando and was removed from service in the early 1990s when the park refurbished the ride. This car has two rows of seating and when the ride was being refurbished, Disney replaced all of the ride cars with ones that had three rows of seating. I believe this change over took place in 1994.”

If you crave Disney nostalgia then you may want to break out your wallet for this one! This Snow White ride vehicle is in great condition and will be the ultimate centerpiece for any Disney Parks collection.

But, the collection of Disney Antiques does not stop there. Lakeland Antique Mall is home to plenty of props to pique your interest. What about this vintage Snow White doll signed by Walt Disney himself?

How much money would you spend on a Disney collectible? Let us know in the comments!

Comments Off on Snow White Ride Vehicle on Sale for $50K