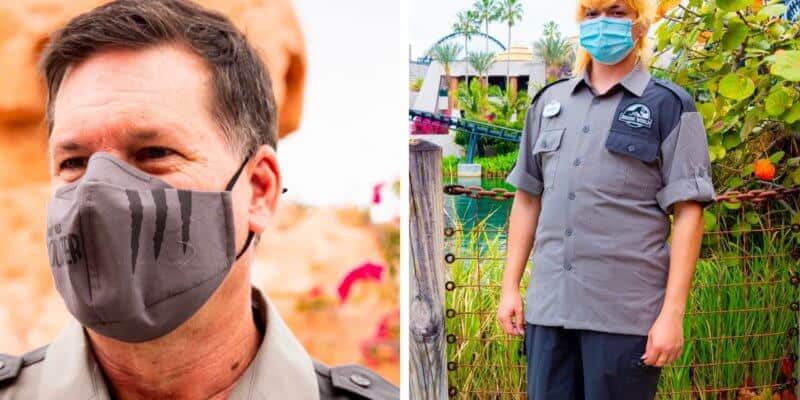 Jurassic World VelociCoaster is going to be roaring to life on June 10, and it seems that Team Members have just as much to look forward to as we Guests.

Not only is the coaster meant to be Universal’s most themed roller coaster yet, but VelociCoaster Team Members are going to be styled accordingly, as well. According to Orlando Informer (@OrlandoInformer), we can see that the new Team Member outfits for the coaster are here, and they look just as one would imagine a worker would wear when managing a raptor paddock.

FIRST LOOK: the team member wardrobe has been revealed for Jurassic World VelociCoaster! It is the first Universal attraction to have themed face masks incorporated into its TM look.

FIRST LOOK: the team member wardrobe has been revealed for Jurassic World VelociCoaster! It is the first Universal attraction to have themed face masks incorporated into its TM look. pic.twitter.com/1cHaSxGA0m

As Orlando Informer noted, this will be the first Universal Orlando Resort ride that has themed face masks to accompany the attraction. Considering how much hype Universal has brought to this attraction, it seems that they are ensuring that everything is perfect, all the way down to the raptor claw marks on the new masks.

Personally, I think that the new Team Member outfits suit the attraction great as they play into the charcoal color scheme that we can see surrounding the ride, but at the same time, the outfits do not pull a heavy focus away from the ride, but simply add to it with the Jurassic World patch reminding Guests exactly where they are.

As of June 10 approaches, it seems that the Jurassic Park section of Islands of Adventure is only continuing to become more themed. With new photo-ops being added in, Guests looking to board VelociCoaster will not only be met with dinosaurs inside the ride but now, as they walk through the land there are more visible dinosaurs around as well. The look of this definitely adds to the Isla Nublar feel that both Jurassic World and Jurassic Park have grown to create.

What do you think about the new VelociCoaster Team Member outfits?