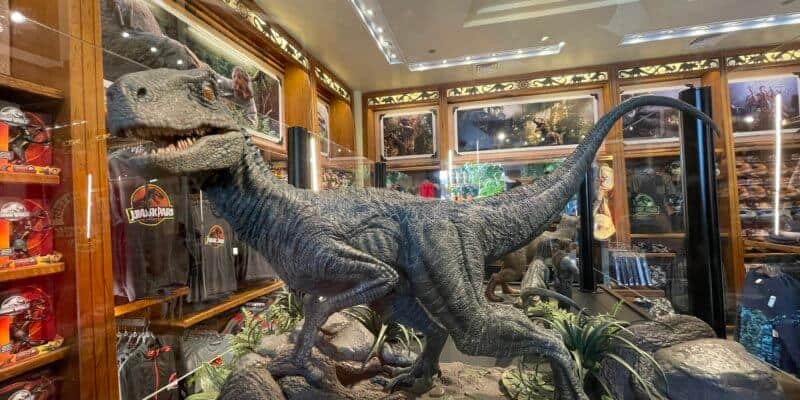 If you are excited for Universal’s VelociCoaster to open, or, perhaps you are a fan of the iconic classic Universal franchise Jurassic Park, we have a high-ticket item that may need to be added to your dinosaur collection.

When Guests visit Universal Orlando Resort, typically a souvenir from their visit would come in the form of a t-shirt, sweater, plush toy, or some form of a commemorative detail of their day at the park. Although many Guests may think that Universal souvenirs, much like Disney World, are over-priced, there is a souvenir that costs a lot more than a $70 sweater.

If you head to the Jurassic Park River Adventure attraction at Universal’s Islands of Adventure, when you exit, you will end up in a gift shop (are we surprised?). Jurassic Outfitters offers many different Jurassic Park and Jurassic World-themed souvenirs, including a giant Blue raptor, as seen in Jurassic World.

Inside Universal (@insideuniversal) took to Twitter to showcase the life-size statue, and showcased the cost of $1,500 for the prehistoric statue.

Here’s an exclusive 1/6 figure of the velociraptor, Blue. Available in Jurassic Outfitters for $1,500.

Here’s an exclusive 1/6 figure of the velociraptor, Blue. Available in Jurassic Outfitters for $1,500. @UniversalORL pic.twitter.com/2J3yD52WYd

If you are a huge Jurassic fan, and you have $1,500 to spend, this could be the perfect addition to your collection. Considering there are only six of the statues made, and VelociCoaster is about to debut, a coaster that will showcase almost identical looking statues, I personally believe these dinos will fly off the show floor as Universal fans will be able to own what feels like a piece of the theme park when purchasing Blue.

That being said, not everyone has that much money lying around, so if you are a big Jurassic fan, but your pockets do not run that deep, an alternative to owning Blue could be to simply just snap a quick photo with him!

Would you pay $1,500 for the giant Blue statue from Jurassic World?