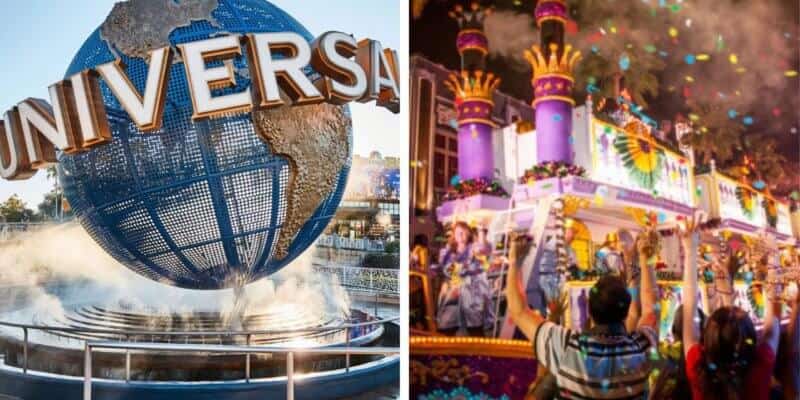 After two Mardi Gras 2021: International Flavors of Carnaval extensions at Universal Orlando Resort, it seems that the theme park is finding both success and demand with their new style of festivals. After the second extension, it seems possible that we may see more festival-style events at Universal if that is what Guests seem to be drawn toward.

We reported that for the second time, Mardi Gras, which is currently underway at Universal Studios Florida, received a second extension. This allows Guests to continue indulging in the food and drink offerings scattered throughout the park, as well as the fun Mardi Gras parade floats and complimentary beads that are currently giving Universal a party-like atmosphere. Previously, the festival was set to end on March 28 but was extended to April 11, and now, will last until May 2.Universal said that this second extension like the first was driven by popular demand.

Mardi Gras has been quite different at Universal this year than in past years as there is no parade due to the ongoing pandemic, so the parade floats, and performers are scattered across the park as to not create one singular crowd. The food options are also scattered as booths throughout the park as well, as opposed to being placed altogether. These changes were of course made to help promote social distancing within the parks, however, now it feels like Mardi Gras is being celebrated all over the theme park and not just in one section, which Guests are clearly enjoying.

This new festival-style arrangement, which may remind Guests a lot of EPCOT’s many food festivals as we have discussed in the past, has allowed Universal to see great success. Before the festival opening, Universal went from hitting capacity daily during the winter holidays to always having room for more. With Mardi Gras, park capacity is being reached much more often, so it seems the festival is really bringing in a lot more Guests.

If Universal wants to continue to see higher Guest attendance, creating these limited-time events is a great way to do so. The food is delicious, and has offerings from around the world which makes Guests feel like they need to keep returning to the park during the festival to try everything! If you are heading to the extended event, you should make sure to hit up the Canada booth, because the Nutella donut (which is actually a Beaver Tail), is mouth-watering delicious, and made to order.

After Mardi Gras concludes, Universal will not have any events until the recently announced Halloween Horror Nights returns. This means the entire summer will remain eventless, as we currently know it. Considering summer is the peak season for Orlando vacations as school is out, it would be interesting to see Universal host another festival during that time, especially now that EPCOT has announced that the International Food and Wine Festival will begin in July.

At the moment, the majority of events happen at Universal Studios, and Universal’s Islands of Adventure is left without any extra celebration! Even CityWalk and Volcano Bay have a few Mardi Gras offerings, so it would be interesting to see a separate event held at Islands of Adventure.

For Guests looking to indulge in the festival, the Mari Gras official Universal description is:

It’s Mardi Gras served up a whole new way – an international food fest with cuisine inspired by Carnaval celebrations from around the world, entertainment and more. You’ll sample the flavors of Puerto Rico, Trinidad and Tobago, Germany, Spain and other regions including, of course, New Orleans. Plus you’ll enjoy spectacular floats on display, street entertainment, beads and more. Experience the food and fun daily at Universal Studios Florida.

It seems the Guest demand for more festivals at Universal Orlando has been quite apparent from the constant extensions of Mardi Gras, so only time will tell to see if Universal will see that demand as an opportunity to create more similar events that are spaced out throughout the park.

Do you think that Universal Orlando will create a summer festival, similar to Mardi Gras?

If all this Universal talk has you craving a trip to the theme parks, you can start planning today! From Mardi Gras to Halloween Horror Nights (HHN), to just walking around CityWalk, there is so much to explore — and so many attractions to ride! Click here to begin!

Comments Off on Guest Demand Could Bring More Festivals to Universal