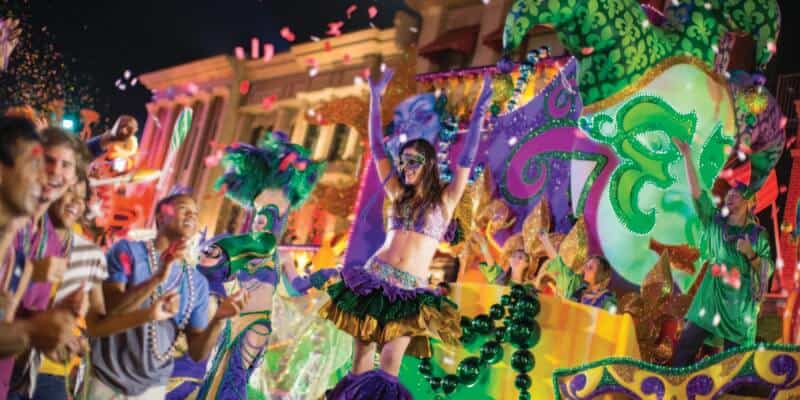 This year, Mardi Gras 2021: International Flavors of Carnaval has had to take a slightly different approach in operation due to the ongoing pandemic. What would typically be a parade party now involves stationary parade floats where performers toss out beads to Guests walking by. There are also food booths scattered throughout Universal Studios Florida.

Although this may create a slightly different atmosphere, now it feels like all of Universal Studios is celebrating Mardi Gras, and the photo-ops due to the stationed parade floats are fantastic! Plus, the food is always delicious at Mardi Gras, so it is nice that the booths and food trucks are scattered throughout because it leaves Guests constantly tempted to taste something new at every turn. Give me some king cake, bayou boil, and stilt walkers ASAP!

This year, it seems that Universal’s Mardi Gras festival has been so popular that it has been extended! As you can see on Universal Orlando Resort’s website, Mardi Gras 2021: International Flavors of Carnaval will now run until April 11. Previously, the event was slated to end on March 28. Universal describes the event as:

It’s Mardi Gras served up a whole new way – an international food fest with cuisine inspired by Carnaval celebrations from around the world, entertainment and more. You’ll sample the flavors of Puerto Rico, Trinidad and Tobago, Germany, Spain and other regions including, of course, New Orleans. Plus you’ll enjoy spectacular floats on display, street entertainment, beads and more. Experience the food and fun daily at Universal Studios Florida.

This means more time in the Mardi Gras Tribute Store!

As someone who has already been to the event, I can personally say that I think it is great that the event has been extended! After the holidays, Universal saw a drop in attendance, but having Mardi Gras running brought back Guests to the park. If this event can help Universal continue to garner revenue to stay profitable, and Guests are loving it, why have it come to an end so soon?

Have you been to Mardi Gras at Universal Studios yet? Do you plan to go?

Speaking of visiting Universal Orlando Resort, do you want to plan a visit? Mardi Gras is underway and Guests can eat and drink while taking in the festivities at Universal Studios Florida! Universal’s Islands of Adventure will give you all the attractions your heart desires.

Volcano Bay, Universal’s water park just reopened to Guests, and CityWalk is the perfect place to eat and shop! With so many savings on Universal Orlando Annual Passes and more, visiting has never been more affordable. Click here to begin your adventure today!

Comments Off on Universal Extends Mardi Gras Due to Popular Demand