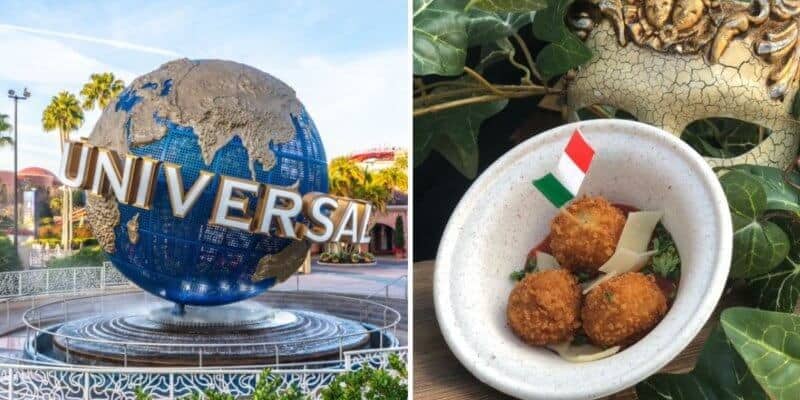 Universal Orlando Resort’s Twitter is highly interactive with Guests — that is not brand-new news to anyone! Although the Twitter account is great at responding, Guests should be aware of the cheeky replies that Universal can make, depending on the conversation.

Most recently, Universal’s Twitter account has exploded… because of arancini. For those who may not know, arancini are an Italian dish and are deep-fried riceballs often filled with tomato sauce and cheese. Universal Orlando Resort is currently celebrating Mardi Gras at Universal Studios Florida, and with the festivities comes a whole bunch of food trucks.

There has been an option for Guests to purchase three arancini for $5.99 at Universal Studios Italy food and drink booth. However, Universal ended up reducing the number to two arancini’s but did not lower the price.

Below, we can see one Guest (of many) who reached out to Universal about the reduction.

Universal is actively reducing the portions of their Mardi Gras offerings from last week. First the drinks, now the Arancini from Italy. Last week on February 10th it was 3, now it’s 2. Actively confirmed with the TM the serving is now 2, same price. @UniversalORL what gives

Universal is actively reducing the portions of their Mardi Gras offerings from last week. First the drinks, now the Arancini from Italy. Last week on February 10th it was 3, now it’s 2. Actively confirmed with the TM the serving is now 2, same price. @UniversalORL what gives pic.twitter.com/eKsT399aTj

Universal quickly rectified the problem by ensuring that the portion size of the arancini went back up to three, and notified anyone who reached out to them via Twitter.

Now, a few days have passed, and just as this was turning into old news, Universal put out this Tweet today, simply just saying “We have”.

Universal is doing a little trolling to everyone who called them out earlier in the week, making it very apparent that the portion size is back to normal.

Some Guests quickly caught onto why Universal Tweeted the photo, by responding to the Tweet with memes about the arancini drama this week.

Universal for the past week: pic.twitter.com/rnHub27WKC

As we mentioned, Universal often likes to poke fun with their Twitter account. The theme park has called out Disney World, Guests, and at times like these, even themselves!

So to all who may have undergone a few sleepless nights due to the missing arancini, rest assured that all is back to normal.

Mardi Gras is going to be lasting from February 6 through March 28 2021 this year, and features stationed parade floats that are perfect for photos, as well as food booths scattered throughout the park.

Have you been to Mardi Gras at Universal Studios yet?

Speaking of visiting Universal Orlando Resort, do you want to plan a visit? Mardi Gras is underway and Guests can eat and drink while taking in the festivities at Universal Studios Florida! Want to ride some thrills? Universal’s Islands of Adventure will give you all the attractions your heart desires. Plus, with Halloween Horror Nights hopefully making its return this Halloween season, you need to be at Universal for all the scares!

Universal’s Volcano Bay, will also be reopening at the end of the month to Guests, and CityWalk is the perfect place to eat and shop! And, Jurassic World’s VelociCoaster is set to roar to life this summer! With so many savings on Universal Orlando Annual Passes and more, visiting the Universal parks has never been more affordable. Click here to begin your adventure today!