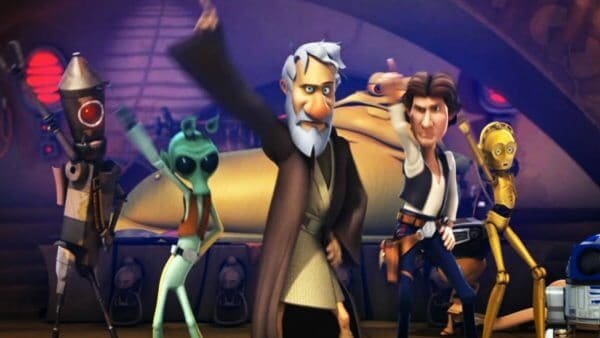 When Star Wars creator George Lucas sold Lucasfilm to The Walt Disney Company in 2012, he effectively gave up full creative control of a galaxy far, far away.

This meant that certain projects that were in development at the Star Wars studio never saw the light of day. Perhaps most notably, the animated series Star Wars: Detours was seemingly lost to the Lucasfilm archives.

In 2015, series cast member Felicia Day confirmed that the show was canceled, but then, five new trademarks for the show were filed in 2018.

Now, The Vulcan Reporter has reported that Star Wars: Detours is set to make its debut on Disney+:

It was reported that roughly two seasons of the show were produced (39 episodes), with many more episodes being left un-produced with finished scripts. Fortunately for Star Wars fans of the series, we have learned that more episodes have been produced since the initial report, with the show being planned to have a Disney+ release.

While we do not know when Disney plans to release the series on its streaming service, we do know that around 52 episodes and specials have fully finished production. It is likely that Star Wars: Detours is planned as a surprise release on May 4, 2021.

The series is unlike anything Star Wars fans have ever seen. It is a parody of daily life in the Star Wars galaxy during the years between Star Wars: Episode III – Revenge of the Sith (2005) and Star Wars: Episode IV – A New Hope (1977), featuring iconic characters like Lando Calrissian, Han Solo, Princess Leia Organa, Boba Fett, and more.

Although the CGI animation style may look similar to Star Wars: The Clone Wars and Star Wars Rebels, the story will be more comedic than the Star Wars universe usually is.

…Star Wars Detours focuses on the universe’s regular folks and their everyday problems… which, to be fair, do frequently involve famous bounty hunters, crazed Ewoks, and even a Dark Lord of the Sith. Welcome to Star Wars: Detours: the other side of the stars, between the wars.

Are you excited to hopefully see Star Wars: Detours debut alongside Star Wars: The Bad Batch on Star Wars Day 2021?