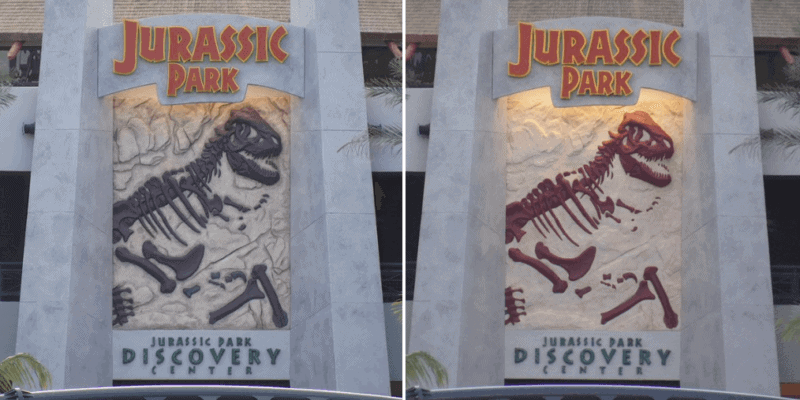 As we now know, Jurassic World VelociCoaster will be officially roaring to life on June 10 at Universal’s Islands of Adventure Park. In preparation, it seems there are final touches on both the VelociCoaster and Jurassic Park land as a whole.

If you have ever seen a photo of the roller coaster, you know that it is placed in front of the Jurassic Park Discovery Center. Considering that the building serves as a backdrop to the coaster, it is of course important that both the coaster and its surroundings look brand new for the grand opening.

Seems like new paint at the waterfront of Jurassic Park Discovery Center might be complete. Comparison of today (1st photo) and yesterday when in progress.

Seems like new paint at the waterfront of Jurassic Park Discovery Center might be complete. Comparison of today (1st photo) and yesterday when in progress. pic.twitter.com/fAWTbSoF64

This refresh does look fantastic! However, it also confirms that both Jurassic World and Jurassic Park will be residing in the same land and timeline. Previously, we discussed how the amalgamation of both franchises jumps timelines, which leave Guests with a more confusing narrative in terms of what land they are actually in — that of Jurassic World or Jurassic Park?

That being said, the two films do piggyback off each other, so it is not too much of a stretch to have the two related franchises featured together in the theme park. Plus, it can also be said that the Discovery Center has been here for quite some time and the Jurassic World franchise is just building off of it.

For now, one thing is for sure — the backdrop to VelociCoaster looks fresh and ready to open!

Do you have any issues having both Jurassic World and Park world collide when visiting Universal Orlando Resort?