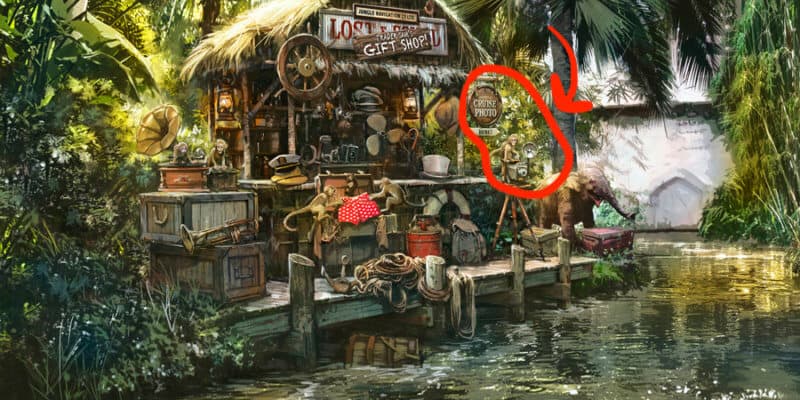 Haunted Mansion marked the 13th ride photo op at Walt Disney World Resort. How fitting! But next up could be Jungle Cruise? Based on artistic renderings sent out by the Disney Parks Blog, we think it just might be!

Disney hasn’t yet announced that an on-ride photo is coming soon to the newly reimagined Jungle Cruise attraction at Disneyland and Magic Kingdom, but we suspect it could happen. Many Jungle Cruise fans know that Trader Sam’s post (whether the man himself or his new Gift Shop) is the last stop on the Rivers before unloading at the pair ‘o docks (paradox) shoreside. It’s here that we see how a Jungle Cruise Ride Photo could be up and coming!

But after examining the retheming rendering further, we see that to the right of the shack, a large “Cruise Photo” sign hangs over a monkey using an old-fashioned camera. It would be so easy for the Monkey’s flash to go off every so often and cue up a ride photo for Jungle enthusiasts. 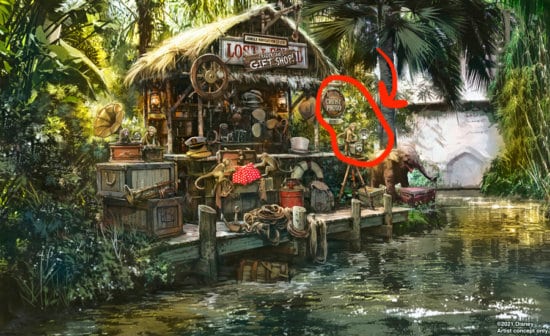 It’s almost as if the sign is set up to get you to look straight into the camera and SMILE for the monkey! This would fix the problem of the Pirates of the Caribbean photo opportunity where boat riders look fairly bored to death before the dark drop…

If the monkey animatronic pulled a string or snapped the flash, all the better for the storytelling.  (I also spy a WDW Trader Sam hat on the counter). 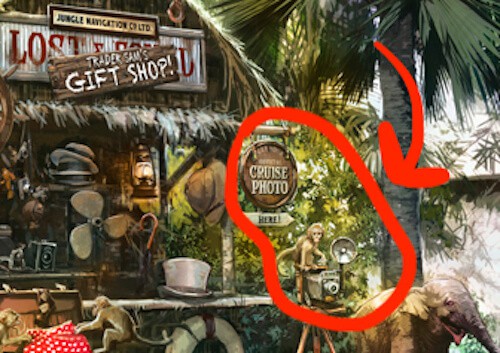 But there could be a problem if the Jungle Cruise Ride Photo comes to pass. The far starboard side carrying river cruisers could be missed with the single flash of a camera. Perhaps the ride photo is more of a video, like the Hollywood Tower of Terror drop? In this way, more riders could be seen from the bow of the boat, and it would also prevent passengers from standing up and possibly tipping the boat.  Another possibility is that the monkey is positioned high enough off the ground to capture all three rows of passengers!

Do you think there will be a ride photo added to the Jungle Cruise? Leave us a comment below with your speculations and punny fun!