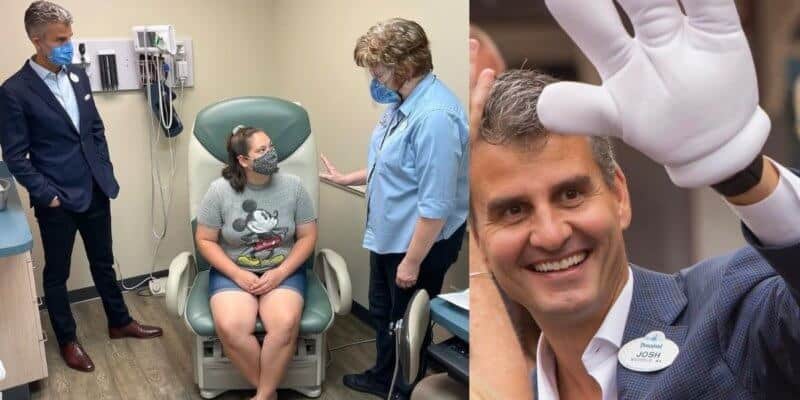 Chairman of Disney Parks, Josh D’Amaro is a very hands-on boss. Disney Guests and Cast Members have seen him walking around the Disney Resorts, Downtown Disney, and Disney theme parks, making sure things are running smoothly and efficiently.

D’Amaro is also known for his kind heart and warmth towards everyone who has dedicated their time and effort towards making the Disney Company what it is today.

Recently on Instagram, Josh D’Amaro shared what a productive week he had at Walt Disney World, and what he is looking forward to in the week to come for Disneyland Resort and Disney California Adventure.

Walt Disney World is home to four Disney theme parks, two water parks, over 30 Resort hotels, and much more, but that didn’t stop Disney Chairman, Disney Parks, Experiences and Products Josh D’Amaro from making his rounds. This week, the Chairman expressed what “a fantastic week” he had engaging with Cast Members in Magic Kingdom, Disney’s Hollywood Studios, Disney’s Blizzard Beach, and seven of the Disney Resort hotels.

Yesterday, D’Amaro was introduced to Disney’s Animal Kingdom’s youngest Rhino named Ranger and shared an adorable video of this cute encounter. He was even seen supporting Cast Members in the Cast Health Services as they received free vaccines, as D’Amaro shared:

And next week… we open Disneyland.

This year has been a happy one for Disneyland! Disney Chairman Josh D’Amaro shared how excited he is that Disneyland in Orange County is reopening in a week after its year-long shut down due to the pandemic.

So far, many Disney Guests have reserved their spot to visit Disneyland Park on the Disneyland theme park reservation calendar and snagged early Disneyland restaurant reservations. This will be a huge event for California residence and Disney fans who have been waiting a long time to return to their Disney theme park. Not only will Disneyland Park return, but California Adventure too, as rides and attractions will become available again!

As a reminder, you must purchase a valid theme park ticket and have a Disney theme park reservation to enter the Disneyland and California Adventure park.

Are you ready for Disneyland Resort? Let us know in the comments below if you are as excited as Josh D’Amaro!