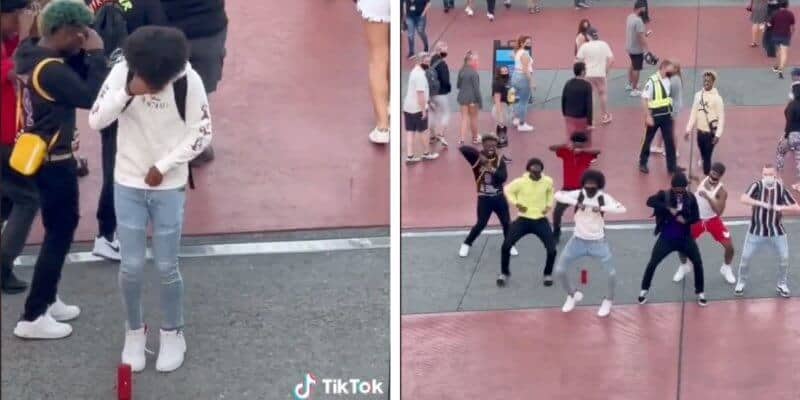 If you are a fan of the classic flash mob scene that we often see as a big grand gesture in movies, or a hilarious YouTube video, you are going to love what happened at Universal Orlando Resort.

As Guests enter the theme park area, they must walk through Universal’s CityWalk, the shopping and eatery section of Universal. Well, it seems that during spring break, some Guests wanted to put on an extra show for others who were also entering.

It seems that there is a current TikTok trend that has users creating content to Natasha Bedingfield’s “Unwritten” and popular TikToker Rony (@rony_boyy) decided to create a flash mob with some of his friends at Universal.

TikTokers typically often film at both Universal and Disney World, but the talent and coordination that this video required really brings it to a new level!

We had everyone lit ? after ‼️ ( Dc me ) with the crew ? #fyp #ronyboyy #trending #AirPodsJUMP #hiphop #viral

Rony and his dance crew tend to do flash mobs and in-sync dances on TikTok quite often, so his followers likely thought that this was a normal video to see on their feed, but as for the Guests at Universal, this likely caused quite the spectacle.

At the moment, when you enter CityWalk, there is a Team Member who is perched on a balcony with a microphone talking to the Guests below — just parallel to where the flash mob took place — and it would have been great to hear his or her commentary after the dance came to an end!

In this behind-the-scenes video of the flash mob, you can see how many Guests were staring at the dance number as it went on. Because the music we hear in the finished product is added in after the video was filmed, to Guests, this just looked like a bunch of dancers dancing perfectly — without any music.

Have you ever seen a flash mob at Universal or Disney World? Would you like to?

If you want to try your hand at witnessing a flash mob at Universal Orlando Resort, why not book a vacation? You can enjoy Volcano Bay during the Orlando summer heat, Universal Studios Florida, as well as Universal’s Islands of Adventure. Click here to begin booking your adventure today!

Comments Off on Universal Guests Shocked By Surprise Flash Mob