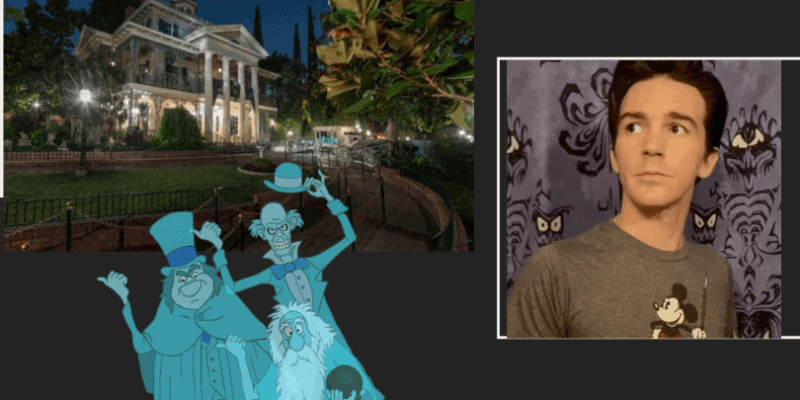 Disneyland and Disney World fans everywhere continue the trend of recreating their favorite Disney Park attractions in their own homes. Now, it seems that actor and fellow Disniac Drake Bell has also decided to join in on the fun.

Using the booming social media platform TikTok, Bell recreated the Haunted Mansion. Wearing a Mickey Mouse t-shirt, he embarks through the Haunted Mansion with the help of some wallpaper, models, portraits, music, and a dash of movie magic.

While Drake Bell’s love of Disneyland is well known, the extent of his love for the Haunted Mansion may not be as much. One would have to be to own so much Haunted Mansion merchandise from the famous purple and black wallpaper to toy models of the hitchhiking ghosts and the elongated portraits and a ghoulish picture of himself. We can also appreciate his commitment to the original Disneyland Haunted Mansion with the inclusion of the Box Ghost (which is not found at its sister mansion in Walt Disney World).

Here at Inside the Magic, it warms our hearts and makes us laugh to see so many Disney Parks fans get creative and attempt to bring the magic of their favorite rides home on an unprecedented scale. Soon, the parks will reopen and we will once again be able to immerse ourselves in our favorite attractions for real.

What Disney World or Disneyland attractions do you miss most? Have you attempted to recreate it yet? Let us know in the comments!