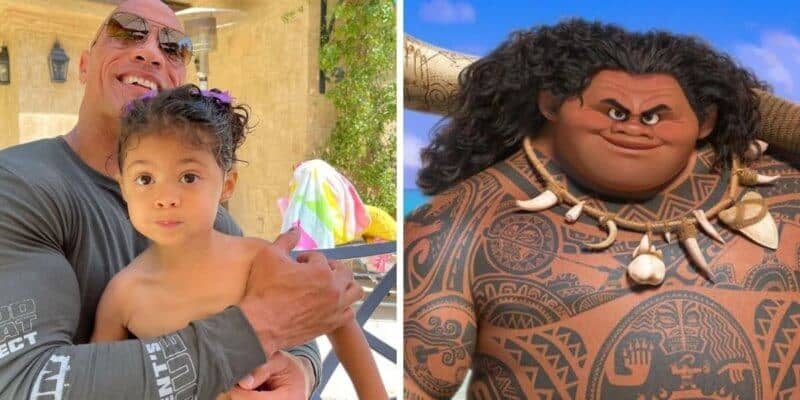 Who is obsessed with Disney’s Moana? After this Disney film was released, I, personally, became an even bigger fan of Dwayne ‘The Rock’ Johnson for his role as Maui the Demigod of the wind and sea! But not everyone believed he was behind this Disney character — Including his own young rock daughter!

Who knew that this retired professional wrestler, well-known actor, and producer would become one of the most beloved Disney sidekicks? Not only is he extremely talented, but he is also a father of three beautiful girls! Dwayne Johnson’s daughters are Simone Alexandra Johnson (August 14, 2001), Jasmine Johnson (December 16, 2015) and Tiana Gia Johnson (April 17, 2018). And here is what Tia Giana, Dwayne’s youngest daughter, had to say recently about his role as Maui.

Related: ‘The Rock’ Will Pay For Your Guacamole in Disney World!

After much convincing and many Instagram posts, Maui actor, Dwayne Johnson, shared with his fans how his now three-year-old daughter, Tia Giana, finally believes that he is, indeed, Maui!

Although his “greatest joy” doesn’t seem that interested in his Disney role, she asks her Beverly Hills father if he is friends with a certain superhero. The Maui star wrote:

Loving, kind, tenacious and tough (like your mama;) and my greatest joy is being your daddy.

Now that she’s finally starting to understand that daddy is Maui from MOANA, she has one very important question —
“Daddy do you know AquaMan?” ?
#thisis3
#my?

However, the funny part is that after Black Adam star Dwayne Johnson’s popular post of his daughter finally acknowledging his work and coming to terms that he indeed voiced Maui in Disney’s animated film, Moana, she can’t help but show admiration for Aquaman instead.

Granted, they are both extraordinary water-related characters and Hawaiian native actors, we can all agree that Dwayne’s role and singing abilities have created a Disney fan base for Maui and his popular song “You’re Welcome“.

Look what AquaMan just did to that man” ?

The birthday girl Tia is OBSESSED with @prideofgypsies!!

She didn’t even wait til I finished the question, before answering definitively, “AquaMan” ???‍♂️

Mahalo Maui — We’ve enjoyed being a part of your personal life with your family! We hope that one day your daughter will give you the same love and admiration for the work you have done for Disney, and your role as Maui that she clearly gives Aquaman.

Do you love Dwayne’s role as Maui in Disney’s Moana? Let us know in the comments below!