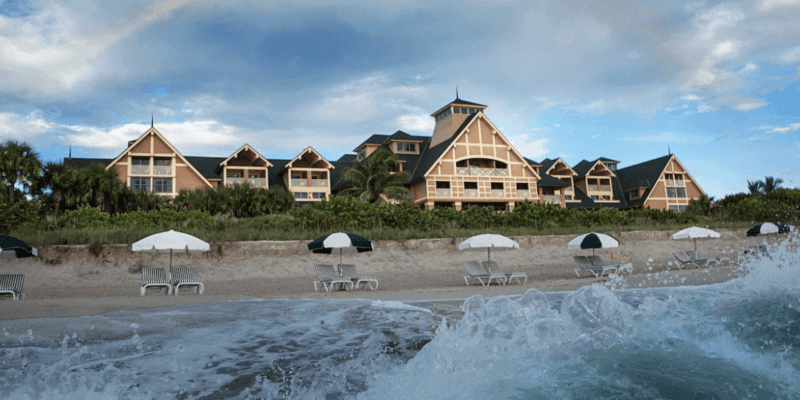 An apparent Guest at Disney’s Vero Beach Resort was reportedly bitten twice by a shark while boogie boarding in the Atlantic Ocean near the Resort.

Dion [Indian River County Fire Rescue Battalion Chief Roger Dion] said the man had wounds to his calf and near his knee on the front and back of his leg. The man came out of the water around 10:30 a.m. [on April 29, 2021]

“He didn’t see the shark, but it appeared to be a shark bite,” said Dion.

It is worth noting that the 54-year-old vacationer was alert and responsive when he was transported to the hospital. Per TC Palm:

“They did a good job,” Dion said. “There was some blood, not an excessive amount.”

The Florida news source also reported that the man was staying at the Disney Vacation Club Resort with his wife. Word on his current condition was not immediately available, but the paper provided details about the apparent shark attack from another couple staying at Disney’s Vero Beach Resort:

A man and woman from Ohio, who also are staying at the resort, said they were on the beach when the man was in the water in front of them.

Ken Obrzut, 67, said the man was about 30 to 40 feet out where the waves broke when he noticed he was in distress.

“I saw his face change,” said Obrzut. “And then he started trying to get out of the water as fast as he could.”

The Florida Fish and Wildlife Conservation Commission has provided helpful information about how to reduce the chances of a shark attack when you are on either the Atlantic Coast or the Gulf Coast in the State of Florida.

Relax on warm sand and play in the sparkling blue waters of Disney’s Vero Beach Resort. Just 2 hours southeast of Walt Disney World Resort, this elegant old-fashioned hideaway is located on Florida’s scenic Atlantic Treasure Coast near the charming community of Vero Beach. Get away from it all in spacious lodgings that provide the comforts of home with an idyllic beach practically at your doorstep.

One of the most unique things about this Disney Resort hotel is that Guests can enjoy sea turtle nesting grounds!

Have you ever stayed at Disney’s Vero Beach Resort?