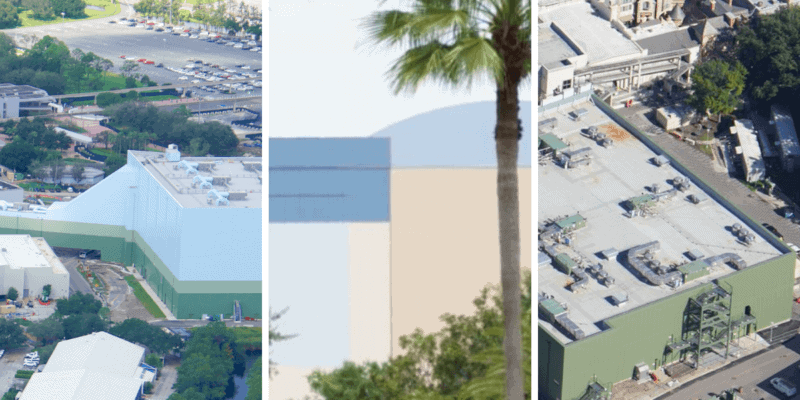 It might sound impossible, but Disney Imagineers and scenic painters invented two unique colors. You may not see these pigments featured on a Disney Park attraction, on a marquee sign , or decorating the indoors of hotels, but you will see them every time to visit Walt Disney World. The big catch is, you might not notice it when you see them in a Disney theme park!

Go Away Green and Blending Blue are two of the most used paint colors at Walt Disney World Resort, but each particular shade is engineered by Disney Imagineers to make your eyes ignore them. Are you able to spot the Go Away Green in this Adventureland photo? Let’s take a closer look!

Go Away Green was formulated by Disney to “erase” backstage buildings and camouflage construction walls from your sight. Because workers obviously can’t decorate everything, and construction walls will eventually come down, Disney’s problem-solving hue blends them away from your eye’s main focus. Go Away Green is a color combination of greenery in the area (and can be more than one palette shade), as well as a brown/gray/green hue that your eye naturally wants to ignore. Unlike bright construction orange that your eye sees well, Go Away Green is the opposite.

The paint color is used in small areas like on trashcans or on a construction fence, and in larger swaths like on the back of the Ratatouille construction area ( photo by @bioreconstruct ). You can see some of this from backstage roadways or, perhaps, the Skyliner cars.

Instagram user Sophie (@Happy.Ever.After.Disney) shares her favorite Go Away Green shots, using this Magic Kingdom lattice box as an example of two different problem solving hue greens. When Cinderella Hub was undergoing construction, the Partners statue was covered with this green shades box. The idea was to have your eye blend over the construction area and keep going towards the castle. You can even see the green construction walls in the distance. What’s important to know here is that Go Away Green can be a few different shades to match the surrounding foliage or trees.

Day 9 of the Disney trivia challenge is about how Disney created a color called Go Away Green. A very bland shade of green you see a lot of in the park but don’t really think anything about.  It was created with the idea that the common eye would glaze right over it. Unless you’re looking for it, it is all too easy to just glance right past anything painted in this all-too-neutral colour. It is used in a lot of places like fences, buildings, the wall around the park… And most famously, the door to the exclusive Club 33. Have you noticed this go away green before?

At Disneyland, we use the use of some darker Go Away Green fencing to keep guests contained from the Pixar Pals Parking Deck construction. While this is not a true use of Go Away Green, it just shows that Disney knows how to blend things from your view using your brain!

A Reddit thread discusses possible color pigments for Go Away Green, and one user suggests that the colors come from the “Plochere color system and match the foliage in Florida.” No color codes are shared, as the colors are obviously proprietary.

Lesser known than its green cousin, Blending Blue came into play when Walt Disney World was built. The sky was so very blue, and with Disney’s lack of space constraints – of which there are many at Disneyland Resort in Anaheim, California – buildings reach far, wide, and high. This meant Imagineers needed to disguise, or blend, these buildings into the Florida-related scenery. They called back to the scenic department in Anaheim and asked for a blue pigment formula to match the Sunshine State sky.

The painters mixed up a formula to match the sky and sent it over to Florida – but it didn’t match the brilliant blue skyline at all. It matched the much duller blue of the California landscape. So, photos were shared, visits were made, and finally, the Floridian shade of Blending Blue was created for Walt Disney World Resort. This reporter was lucky enough to hear this story from an Imagineer on a trip to Disney Springs as a Disney Parks Moms Panelist.

For a real-life example of Blending Blue, we look to Bioreconstruct (@ Bioreconstruct ) on Twitter. They shared a photo a few years ago of the Rock ‘n’ Roller Coaster building being repainted backstage. But it’s not just any shade of blue… it’s Blending Blue, specifically engineered to match the sky colors in central Florida, year-round. The tan portion of the building was the old color, and you can see the lighter blending blue being painted right on top of it.

Need more blending blue? Let’s look at the Guardians of the Galaxy: Cosmic Rewind building at EPCOT. The huge building that will house the largest indoor coaster in the world has a mighty size. The paint job on this backstage building is really quite creative in that it uses TWO shades of Go Away Green, as well as the iconic Blending Blue. The striped look is odd on paper, but when you see it amongst the tree-scape and imagine seeing it from the ground, the colors are a perfect use.

Aerial look at Play Pavilion and Guardians of the Galaxy construction at EPCOT. Nearly all of the Play Pavilion roof panels have changed. pic.twitter.com/45L2F83RFk

Where do you often see Go Away Green or Blending Blue? Leave us a comment below!