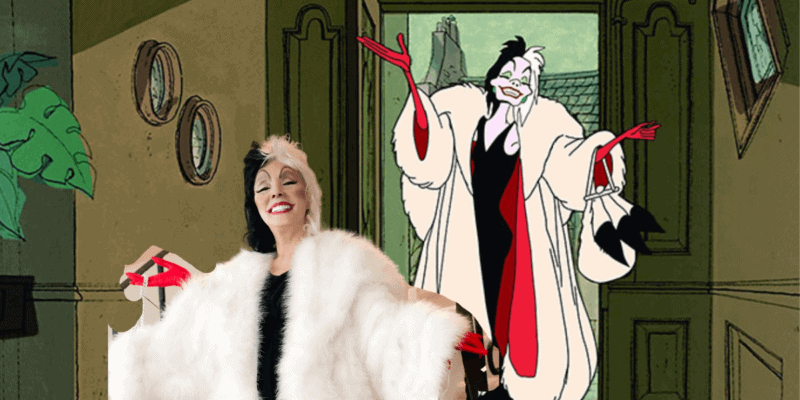 The actress and singer-turned YouTuber has bought Cruella to life with frightening accuracy. She even voiced the character in the Japanese-dubbed version of the 101 Dalmatians 2 film! You’ve never seen a Cruella de Vil cosplay like this!

Related: VIDEO: Meet the Real-Life Perdita from 101 Dalmatians with A Record Breaking Litter

The evil villain of 101 Dalmatians has remained a fan-favorite character for many years, just for how fabulously evil she is! However, what isn’t at all evil is her cosplayer: Naoko Ken. Naoko joined YouTube in February 2020 and her videos have since amassed over 17 million views. Her content focuses on lifestyle videos and tutorial videos.

Here’s how Naoko describes herself on her Youtube channel:

Hello! For those who don’t know me, my name is Naoko Ken. I’m 67 years old. I’ve been working as a singer for almost 50 years in Japan. I love to do fun things to make people happy. I sometimes do too much, so people think I am a comedian! Anyway, thank you very much for visiting my YouTube Channel. Please subscribe for more videos! I hope you enjoy my videos!

One such tutorial video is how to become Cruella. Check it out for yourself!

The look is simply staggering and we love the costume!

Who is Cruella de Vil?

Cruella de Vil is the main antagonist of the 1961 Disney classic 101 Dalmatians. Her devilish plan involves kidnapping the titular puppies and turning them into a stylish-yet-macabre fur coat. In the original movie she was voiced by Betty Lou Gerson — with Naoko Ken voicing the character in the Japanese-dubbed version of the film 101 Dalmatians 2 — and in the 1996 live-action remake, she was played by Glenn Close.

Close would play de Vil once more in 102 Dalmatians in 2000. Regardless of which version you watch, Cruella is always presented as bad to the bone. She’s a horrible villain which only makes her more fun and cements her as a character that fans love to hate.

Notably, we might see a new side to Cruella as she’ll be the focus of a new film coming this year. Cruella will star Emma Stone as she plays the titular villain-turned-antihero in this solo prequel. It’s being released on both Disney+ and in cinemas.

In the meantime, we can enjoy Ken’s incredible Cruella cosplay! You can follow her on Twitter to see more. We think that she could even give Glenn Close’s Halloween costume a run for its money!

Related: Dr. Facilier Should Be Disney’s Next Live-Action Villain Backstory

All about the new Cruella movie

If you’re not in the know about the new Cruella de Vil movie, let us help you out. The new film stars Emma Stone as the newly dubbed Estella De Vil, a young fashion designer in London. We follow the character in her early years as the young Estella meets fashion legend Baroness von Hellman (Emma Thompson). It isn’t clear what comes next, but we know that the character will learn to embrace her cruel heart and transform into the evil thing we recognize from the original movie.

The film revives a classic Disney villain who hasn’t been seen in years. Indeed, the last time we saw Cruella in a feature film was in the year 2000 as 101 Dalmatian‘s villain extraordinaire. The new film has been described as similar to Joker (2019), though Estella herself, Emma Stone has said it is notably different to Todd Phillip’s film. Indeed, she said she “wished she could be more like him” [Joker actor Joaquin Phoenix].

We at Inside the Magic can’t wait for more evil Cruella antics, and we’ll be first in line to catch the new film when it releases in May.

Cruella will release on Disney+ and in theatres on May 28th. It’s directed by Craig Gillespie and stars Emma Stone as a young Cruella de Vil. Catch this film as well as the original movie and remake on Disney+!